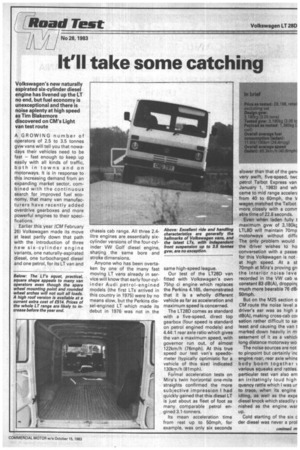 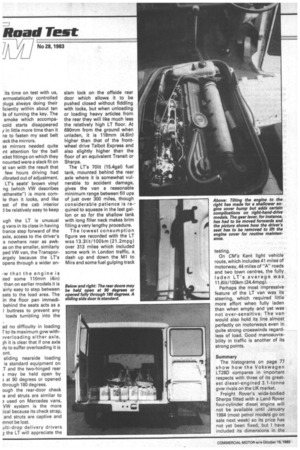 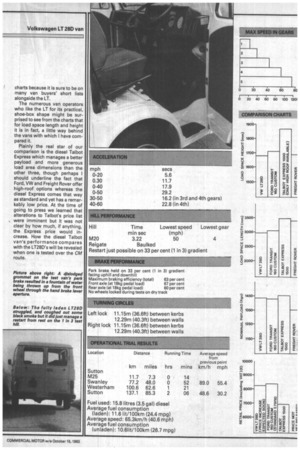 Volkswagen's new naturally aspirated six-cylinder diesel engine has livened up the LT no end, but fuel economy is unexceptional and there is noise aplenty at high speed as Tim Blakemore discovered on CM's Light van test route

A GROWING number of operators of 2.5 to 3.5 tonnes gvw vans will tell you that nowadays their vehicles need to be fast — fast enough to keep up easily with all kinds of traffic, both in towns and on motorways. It is in response to this increasing demand from an expanding market sector, combined with the continuous search for improved fuel economy, that many van manufacturers have recently added overdrive gearboxes and more powerful engines to their specifications.

Earlier this year (CM February 261 Volkswagen made its move at least partly down that path with the introduction of three new six-cylinder engine variants, one naturally-aspirated diesel, one turbocharged diesel and one petrol, for its LT van and chassis cab range. All three 2.4litre engines are essentially sixcylinder versions of the four-cylinder VW Golf diesel engine, sharing the same bore and stroke dimensions.

Anyone who has been overtaken by one of the many fast moving LT vans already in service will know that early four-cylinder Audi petrol-engined models (the first LTs arrived in this country in 1975) were by no means slow, but the Perkins diesel-engined LT which made its debut in 1976 was not in the same high-speed league.

Our test of the LT28D van fitted with Volkswagen's own 75hp ci engine which replaces the Perkins 4.165, demonstrated that it is a wholly different vehicle as far as acceleration and maximum speed is concerned.

The LT28D comes as standard with a five-speed, direct top gearbox (four speed is standard on petrol engined models) and 4.44:1 rear axle ratio which gives the van a maximum speed, with governor run out, of almost 122km/h (76mph). At this true speed our test van's speedometer (typically optimistic for a vehicle of this size) indicated 130km/h (81mph).

For=rnal acceleration tests on Mira's twin horizontal one-mile straights confirmed the more subjective impression I had quickly gained that this diesel LT is just about as fleet of foot as many comparable petrol engined 3.1-tonners.

Its mean acceleration time from rest up to 50mph, for example, was only six seconds slower than that of the gem very swift, five-speed, twc petrol Talbot Express van January 1, 1983) and wh came to mid range accelerE from 40 to 60mph, the V wagen matched the Talbot more closely with a comrr able time of 22.8 seconds.

Even when laden fully t maximum gvw of 3,1804_ LTL8D will maintain 70mp motorways without diffic The only problem would the driver wishes to ho conversation with a passel for this Volkswagen is not at high speed. At a st 70mph at Mira's proving gn the interior noise leve recorded in the VW cab v\ constant 83 dB(A), droppini much more bearable 76 dBi 50mph.

But on the M25 section o CM route the noise level a driver's ear was as high a dB(A), making cross-cab cor sation rather difficult to sa■ least and causing the van t marked down heavily in m: sessment of it as a vehicli long distance motorway wo The noise sources are not to pinpoint but certainly inc engine roar, rear axle whine body boom together various squeaks and rattles. particular test van also em an irritatingly loud high quency rattle which I was ur to trace, when its engine idling, as well as the expE diesel knock which steadily ( nished as the engine war up.

Cold starting of the six c der diesel was never a pro) continued ay its time on test with us, ermostatically controlled 9Iugs always doing their Ficiently within about ten is of turning the key. The smoke which accompacold starts disappeared y in little more time than it ne to fasten my seat belt lea the mirrors.

3e mirrors needed quite ,nt attention for the ball icket fittings on which they nounted were a slack fit on st van with the result that

few hours driving had Abrated out of adjustment.

LT's seats' brown vinyl ng (which VW describes latherette") is more cornle than it looks, and like est of the cab interior I be relatively easy to keep ugh the LT is unusual g vans in its class in having trance step forward of the axle, access to the driver's s nowhere near as awkas on the smaller, similarly ped VW van, the Transporargely because the LT's opens through a wider an w that the engine is ited some 110mm (4in) than on earlier models it is airly easy to step between eats to the load area. The in the floor pan immedibehind the seats acts as a I buttress to prevent any loads tumbling into the ad no difficulty in loading r to its maximum gvw withwerloading either axle, gh it is clear that if one axle ly to suffer overloading it is ant.

sliding nearside loading is standard equipment on .T and the two-hinged rear 3 may be held open by 3 at 90 degrees or opened through 180 degrees.

ough the rear-door check is and struts are similar to a used on Mercedes vans, VW system is the more :ice' because its check strap, and struts are captive and innot be lost.

Jlti-drop delivery drivers g the LT will appreciate the slam lock on the offside rear door which allows it to be pushed closed without fiddling with locks, but when unloading or loading heavy articles from the rear they will like much less the relatively high LT floor. At 690mm from the ground when unladen, it is 118mm (4.6in)• higher than that of the frontwheel drive Talbot Express and also slightly higher than the floor of an equivalent Transit or Sherpa.

The LT's 7011t (15.4gal) fuel tank, mounted behind the rear axle where it is somewhat vulnerable to accident damage, gives the van a reasonable minimum range between fill ups of just over 300 miles, though considerable patience is required to squeeze in the last gallon or so for the shallow tank with long filler neck makes brim filling a very lengthy procedure.

The lowest consumption figure we recorded with the LT was 13.31it/100km (21.2mpg) over 313 miles which included some work in London traffic, a. dash up and down the M1 to Mira and some fuel gulping track testing.

Perhaps the most impressive feature of the LT van was its steering, which required little more effort when fully laden than when empty and yet was not over-sensitive. The van would also hold its line almost perfectly on motorways even in quite strong crosswinds regard less of load. Good manoeuvrability in traffic is another of its strong points.

Summary The histograms on page 77 show how the Vokswagen LT28D compares in important respects with three of its great est diesel-engined 3.1-tonne gvw rivals on the UK market.

Freight Rover's wide-bodied Sherpa fitted with a Land Rover four-cylinder diesel engine will not be available until January 1984 (most petrol models go on sale next week) so its price has not yet been fixed, but I have included its dimensions in the

charts because it is sure to be on many van buyers' short lists alongside the LT.

The numerous van operators who like the LT for its practical, shoe-box shape might be surprised to see from the charts that for load space length and height it is in fact, a little way behind the vans with which I have compared it.

Plainly the real star of our comparison is the diesel Talbot Express which manages a better payload and more generous load area dimensions than the other three, though perhaps I should underline the fact that Ford, VW and Freight Rover offer high-roof options whereas the diesel Express comes that way as standard and yet has a remarkably low price. At the time of going to press we learned that alterations to Talbot's price list were imminent but it was not clear by how much, if anything, the Express price would increase. How the diesel Talbot van's performance compares with the LT2E4D's will be revealed when one is tested over the CM route.