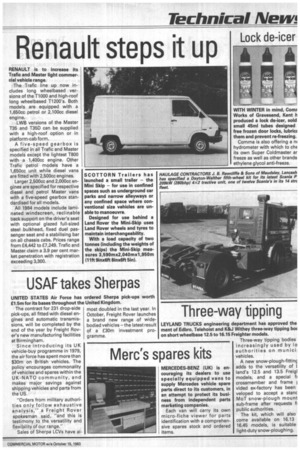 Page 17, 15th October 1983 — Three-way tipping
Close
Noticed an error?
If you've noticed an error in this article please click here to report it so we can fix it.

A new snow-plough-fittinc, adds to the versatility of land's 12.5 and 13.5 Freigl models, and a special fi crossmember and frame I vided ex-factory has been veloped to accept a stanc MoT snow-plough mount sub-frame after requests fi public authorities.

The kit, which will also come available on 16.13 16.45 models, is suitable light-duty snow-ploughing.