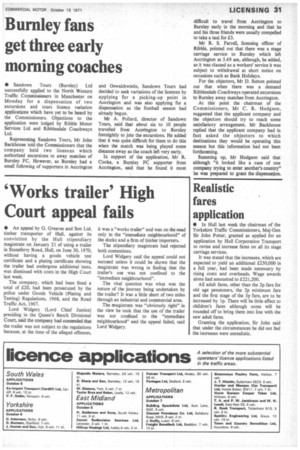 Page 33, 15th October 1971 — Burnley fans get three early morning coaches
Close
Noticed an error?
If you've noticed an error in this article please click here to report it so we can fix it.
Keywords : Accrington, Market Towns In England, Burnley

• Sandown Tours (Burnley) Ltd successfully applied to the North Western Traffic Commissioners in Manchester on Monday for a dispensation of two excursions and tours licence variation applications which have yet to be heard by the Commissioners. Objections to the application were lodged by Ribble Motor Services Ltd and Ribblesdale Coachways Ltd.

Representing Sandown Tours, Mr John Backhouse told the Commissioners that the company held two licences which authorized excursions to away matches of Burnley FC. However, as Burnley had a small following of supporters hi Accrington and Oswaldtwistle, Sandown Tours had decided to seek variations of the licences by applying for a picking-up point in Accrington and was also applying for a dispensation as the football season had already begun.

Mr A. Pollard, director of Sandown Tours, said that about six to 10 people travelled from Accrington to Burnley fortnightly to join the excursions. He added that it was quite difficult for them to do this when the match was being played some distance away as the coach left very early.

In support of the application, Mr R. Cooke, a Burnley FC supporter from Accrington, said that he found it most difficult to travel from Accrington to Burnley early in the morning and that he and his three friends were usually compelled to take a taxi for £3.

Mr R. S. Farrell, licensing officer of Ribble, pointed out that there was a stage carriage service to Burnley which left Accrington at 5.49 am, although, he added, as it was classed as a workers' service it was subject to withdrawal at short notice on occasions such as Bank Holidays.

For the objectors, Mr D. Sutton pointed Out that when there was a demand Ribblesdalt Coachways operated excursions to Burnley away matches from Accrington.

At this point the chairman of the Commissioners, Mr C. R. Hodgson, suggested that the applicant company and the objectors should try to reach some satisfactory arrangement. Mr Backhouse replied that the applicant company had in fact asked the objectors to which destinations they would be operating this season but this information had not been forthcoming.

Summing up, Mr Hodgson said that although "it looked like a case of one company trying to enter another's country" he was prepared to grant the dispensation.