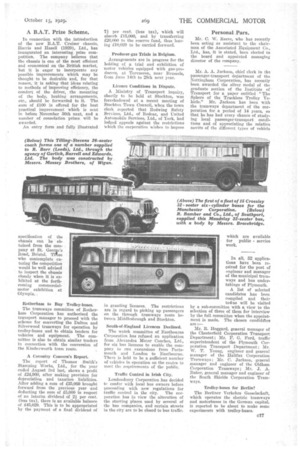 In connection with the introduction of the new B.A.T. Cruiser chassis, Harris and Hese11 (1929), Ltd., has inaugurated an interesting prize competition. The company believes that the chassis is one of the most efficient and economical on the British market, but it is eager to incorporate any possible improvements which may be thought to be desirable and, for that reason, it is asking that ideas relating to methods of improving efficiency, the comfort of the driver, the mounting of the body, braking arrangements, etc., should be forwarded to it. The cum of £100 is offered for the best practical improvement which is sent in before November 30th next, and a number of consolation prizes will be awarded.

An entry form and fully illustrated

specification of the chassis can be obtained from the company at St. George's Road, Bristol. Tltse who contemplate entering the competition would be well advised to inspect the chassis closely when it is exhibited at the forthcoming commercialmotor exhibition at Olympia.

The tramways committee of Rotherham Corporation has authorized the transport manager to proceed with the scheme for converting the Dalton and Silverwood tramways for operation by trolley-buses and to obtain tenders for vehicles and equipment. The committee is also to obtain similar tenders in connection with the conversion of the Kimberworth tram route.

The report of Thomas Smith's Stamping Works, Ltd., for the year ended August 3rd last, shows a profit of 124,960, after making provision for depreciation and taxation liabilities. After adding a sum of 125,069 brought forward from the previous year and deducting the sum of £5,000 in respect of an interim dividend of 2i per cent. (less tax), there is an available balance of 145,029. This is to be appropriated by the payment of a final dividend of 7i per cent. '(less tax)', which will absorb £15,000, and by transferring 120,000 to the reserve fund, thus leaving 110,029 to be carried forward.

Arrangements are in progress for the holding of a trial and exhibition of motor vehicles equipped with gas-producers, at Tervueren, near • Brussels, from. June 14th to 28th next year.

in granting licences. The restrictions are in regard to picking up passengers on the through tramways route between Middlesbrough and Stockton.

South-of-England Licences Declined. The watch committee of Eastbourne Corporation has refused an application from Alexandra Motor Coaches, Ltd., for six bus licences to enable the company to run excursions from Partsmouth and London to Eastbourne. There is held to be a sufficient number of vehicles in operation on the routes to meet the requirements of the public.

Londonderry Corporation has decided t(, confer with local bus owners before proceeding with new regulations for traffic control in the city. The corporation has in view the alteration of

the starting places used by several of the bus companies, and certain streets in the city are to be closed to bus traffic.

Mr. C. W. Reeve, who has recently been acting as assistant to the chairman of the Associated Equipment Co., Ltd., has, it is stated, been elected to the board and appointed managing director of the company.

Mr. A. A. Jackson, chief clerk in the passenger-transport dePartmeut of the Nottingham Corporation, has recently been awarded the silver medal of the graduate section of the Institute of' Transport for a paper entitled " The Sphere of the Trackless Trolley Vehicle." Mr. Jackson has been with the tramways department of the corporation for a period of 14 years, so that he has had every chance of studying local passenger-transport conditions and of appreciating the relative merits of the different types of vehicle

which are available for public service work.

In all, 52 applications have been received for the post of engineer and manager of the municipal tramways and bns undertakings of Plymouth.

The Berliner Verkehrs Gesselsehaft, which operates the electric tramways and motorbuses in the German capital, it reported to be about to make some experiments with trolley-buses.