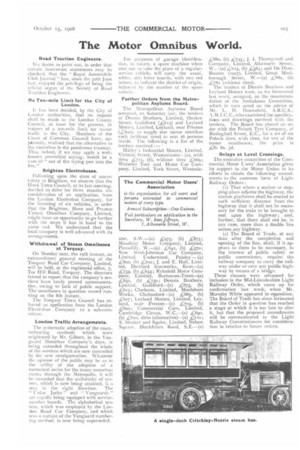 Wu desire to point out, in order that certain inaccurate statements may be checked, that the " Royal Automobile Club Journal " has, since the 30th June last, enjoyed the privilege of being the official organ of the Society of Road Traction Engineers.

No Ten-mile Limit for the City of London.

It has been decided, by the City of London authorities, that no request shall be made to the London County Council, at least for the present, in respect of a ten-mile limit for motor traffic in the City. Members of the Court of Common Council have, apparently, realised that the alternative to the [noun-bus is the ponderous tramcar. This, indeed, if we may apply a wellknown proverbial saying, would be a case of " out of the frying pan into the fire," Brighton Electrobuses.

Following upon the state of uncertainty at Brighton, we observe that the I fove Town Council, at its last meeting, decided to defer for three months the consideration of an application, from the London Electrobus Company, for the licensing of six vehicles, in order that the Brighton, Hove and Preston United Omnibus Company, Limited, might have an opportunity to go further with the steps it has in hand to the same end. We understand that the local company is well advanced with its arrangements.

Withdrawal of Steam Omnibuses at Torquay.

On Monday next, the reth instant, an extraordinar3'general meeting of the Torquay Road Car Company, Limited, will be held, at the registered office, 7, Tor Hill Road, Torquay. The directors intend to report that the company's services have lately proved unremunerative, owing to lack of public support. The omnibuses in question ceased running on the 8th instant.

The Torquay Town Council has referred an application from the London Electrobus Company to a sub-committee.

The systematic adoption of the routeindicating methods which were originated by Mr. Gilbert, in the Vanguard Motorbus Company's days, is being extended throughout the whole of the services which are now controlled by the new amalgamation. Whatever the opinion of the public may be as to the utility of the adoption of a numerical series for the many motorbus routes through the Metropolis, it will be conceded that the uniformity of systern, which is now being attained, is a step in the right direction. The " Union Jacks " and " Vanguards " are rapidly being equipped with servicenumber boards. The alphabetical system, which was employed by the London Road Car Company, and which was a variant of the Vanguard numbering method, is now being superseded. For purposes of garage identification, in future, a spare machine when sent out to take the place of a regularservice vehicle, will carry the usual, white, side letter boards, with two red letters, to indicate the district of origin, followed by the number of the spare vehicle.

Further Orders from the Metropolitan Asylums Board.

The Metropolitan Asylums Board accepted, on Saturday last, the tenders of Dennis Brothers, Limited, Onslow Street, Guildford (6re) and Leyland Motors, Limited, Leyland, near Preston (Lboo), to supply one motor omnibus each (without tires) to seat 16 persons inside. The following is a list of the tenders received :— Halley's industrial Motors, Limited, Victoria Street, -Westminster(a), with tires ..713, (b), without tires. £669; Wolseley Tool and Motor Car Company, Limited, York Street, -Westmin

The tenders of Dennis Brothers and Levland Motors were, as we forecasted last week, accepted, on the recomtnendation of the Ambulance Committee, which in turn acted on the advice of Mr. L. H. Ilounsfield, A.R.C.S., A . M. I . C. E., who examined the specifications and drawings received with the tenders. The Board has placed an order with the Polack Tyre Company, of Basinghall Street, E.C., for a set of six Polack tires, with rims, for one of the motor omnibuses; the price is 81 8s. 3d.

The executive committee of the Commercial Motor Users' Association gives its support to the Motor Union in its efforts to obtain the following amendments to the common form of Light Railway Orders : (i) That where a station Or stopping-place adjoins the highway, the station platforms shall be erected to such sufficient distance from the highway that it shall not be necessary for the train to be brought to rest upon the highway ; and, further, that there shall not be, in any case, more than a double line across any highway. (2) The Board of Trade, at any time after the completion and opening of the line, shall, if it appears to them to be necessary, in the interest of public safety or public convenience, require the railway company to carry the rail. way under or over any public highway by means of a bridge.

These clauses were advanced for inclusion in the Mid-Lincolnshire Light Railway Order, which came up for confirmation last week, when Mr. Moresby White appeared in opposition. The Board of Trade has since intimated that the Order in question has reached a stage at which it is too late to alter it, but that the proposed amendments will be communicated to the Light Railway Commissioners for consideration in relation to future orders.