Motor Traffic in the City of London. 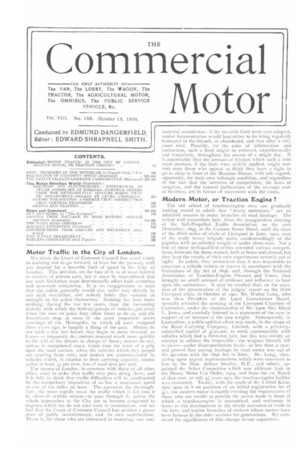 Page 1, 15th October 1908 — Motor Traffic in the City of London.
Close
Noticed an error?
If you've noticed an error in this article please click here to report it so we can fix it.

We think the Court of Common Council has :tem] wisely in deciding not to go forward, at least for the present, with any request for a ten-mile limit of speed in the City of London. This decision, on the face of it, is of most interest to owners of private cars, but it must be remembered that any such limitation must detrimentally a ffect both ntotorbus and motorcab companies. It is no exaggeration Co state that the public generally would also suffer very directly by any such restriction, and nobody holds this opinion as strongly as the police themselves. Nothing has beet, more striking, during the last few years, than the increasing alacrity with which the held-up groups of vehicles get away when the men on point duty allow them LO do so, and the fiye-mintite stop, at some of the more important street crossings of the Metropolis, to which all were resigned three years ago, is happily a thing of the past. Motors do not back a few feet before they begin to move forward, as horses eo frequently do; motors respond much more quickly to the will of the drivers in charge of them; motors do not, unless in exceptional cases, waste time for want of a grip upeat the road surface, when the vehicles which they propel are starting from rest; and motors are accommodated in vehicles which, in relation to their carrying capaeity, monopolise at least 33 per cent. less of road area per unit.

The streets of London, in common with those of all other cities, exist in order that traffic may pass along zind it is folly to think that traffic difficulties will be ameliorated by the compulsory imposition of so low a maximum speed as

material consolation : if the ten-mile limit were ever adopted, ocular demonstration would lead either to its being regularly lmnoured in the breach, or abandoned, and that after a very short trial. Possibly, for the sake: of information and instruction, such a limit might be enforced, experimentally and tentatively, throughout the course of a single day. It is conceivable that the amount of friction which such a trial must produce, if the limit were strictly applied, might convert even those who appear to think they have a right to go to sleep in front of the Mansion House, with sohe regard, apparently, for their own lethargic condition, and regardless of the fact that the interests of competition, the laws of progress, and the natural inclinations clf the average man of business, are in favour of movement with the times.