JANUS . . . a new Geddes axe may WRITES strike at the root of the 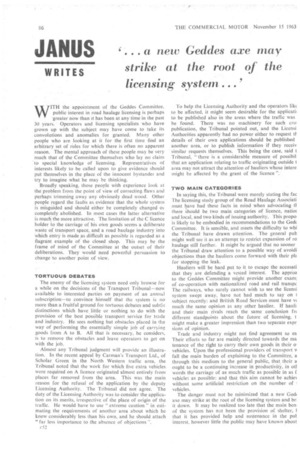 Page 88, 15th November 1963 — JANUS . . . a new Geddes axe may WRITES strike at the root of the
Close
Noticed an error?
If you've noticed an error in this article please click here to report it so we can fix it.

WITH the appointment of the Geddes Committee, public interest in road haulage licensing is perhaps .greater now than it has been at any time in the past 30 years. Operators and licensing specialists who have grown up with the subject may have come to take its convolutions and anomalies for granted. Many other people who are looking at it for the first time find an arbitrary set of riles for which there is often no apparent reason. The mental approach of these people may be very much that of the Committee themselves who lay no claim to special knowledge of licensing. Representatives of interests likely to be called upon to give evidence should put themselves in the place of the innocent bystander and try to imagine what he may be thinking.

Broadly speaking, those people with experience look at the problem from the point of view of correcting flaws and perhaps trimming away any obviously dead wood. Other people regard the faults as evidence that the whole system is misguided and should either he completely changed QL completely abolished. In most cases the latter alternative is much the more attractive. The limitation of the C licence holder to the carriage of his own goods seems a deliberate waste of transport space, and a road haulage industry into which entrY is made as difficult as possible is regarded as a flagrant example of the closed shop. This may be the frame of mind of the Committee at the outset of their deliberations. They would need powerful persuasion to change to another point of view.

The enemy of the licensing system need only browse for a while on the decisions of the Transport Tribunal—now available to interested parties on payment of an annual subscription—to convince himself that the system is no more than a fruitful ground for tortuous debates and subtle distinctions which have little or nothing to do with the provision of the best possible transport service for trade and industry. He sees nothing but obstacles placed in the way of performing the essentially simple job of carrying goods from A to B. All that is necessary, he considers, is to remove the obstacles and leave operators to get on with the job.

Almost any Tribunal judgment will provide an illustration. In the recent appeal by Carman's Transport Ltd., of Scholar Green in the North Western traffic area, the Tribunal noted that the work for which five extra vehicles were required on A licence originated almost entirely from places far removed from the area. This was the main reason for the refusal of the application by the deputy Licensing Authority. The Tribunal did not agree. The duty of the Licensing Authority was to consider the application on its merits, irrespective of the place of origin of the traffic. He would have to use " extreme caution " in estimating the requirements of another area about which he knew considerably less than his own, and he should attach "far less importance to the absence of objections ".

To help the Licensing Authority and the operators likc to be affected, it might seem desirable for the applicati, to be published also in the areas where the traffic was be found. There was no machinery for such cro. publication, the Tribunal pointed out, and the Licensi Authorities apparently had no power either to request tfdetails of their own applications should be published another area, or to publish information if they receiv similar requests themselves. This being the case, said t Tribunal, "there is a considerable measure of possibil that an application relating to traffic originating outside t area may not attract the attention of hauliers whose intere might be affected by the grant of the licence ".

TWO MAIN CATEGORIES In saying this, the Tribunal were merely stating the fac The licensing study group of the Road Haulage Associati .must have had these facts in mind when advocating a there should be two main categories of licence, natior and local, and two kinds of issuing authority. This propo: is likely to be embodied in recommendations to the Ged( Committee. It is sensible, and meets the difficulty to whi the Tribunal have drawn attention. The general pub might well see it as an attempt to restrict expansion of ro haulage still further. It might be argued that no sooner the Tribunal draw attention to a possible way of avoidi objections than the hauliers come forward with their ph for stopping the leak.

Hauliers will be hard put to it to escape the accusati that they are defending a vested interest. The approa to the Geddes Committee might provide another exami of co-operation with nationalized road and rail transpc The railways, who surely cannot wish to see the licensi system swept away, have not had much to say on subject recently: and British Road Services must have v( much the same opinion as any other haulier. If hauli, and their main rivals reach the same conclusion ft.( different standpoints about the future of licensing, t might make a greater impression than two separate expr sions of opinion.

Trade and industry might not find agreement so ea Their efforts so far are mainly directed towards the ma tenance of the right to carry their own goods in their o. vehicles. Upon the professional providers of transport v fall the main burden of explaining to the Committee, a through this medium to the general public, that their a ought to be a continuing increase in productivity, in otl words the carriage of as much traffic as possible in as f vehicles as possible: and that this aim cannot be achie\ without some artificial restriction on the number of I vehicles.

The danger must not be minimized that a new Gedi axe may strike at the root of the licensing system and bi-i it down. It may be realized too late that the main ben, of the system has not been the provision of shelter, 1 that it has provided help and sustenance in the put interest, however little the public may have known about