"Transport Can Benefit from Time Study" 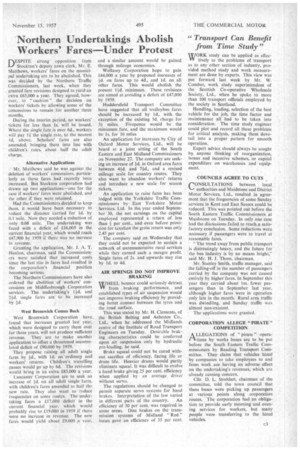 Page 39, 15th November 1957 — "Transport Can Benefit from Time Study"
Close
Noticed an error?
If you've noticed an error in this article please click here to report it so we can fix it.
Keywords : Maidstone, Kent, Counties Of England, Geography Of England, Maidstone & District Motor Services, Public Transport, Bus

WORK study can be applied as effectively to the problems of transport as to any other section of industry, provided method study and work measurement are done by experts. This view was put forward last week by Mr. W. Comber, work study superintendent of the Scottish Co-operative Wholesale Society, Ltd., when he spoke to more than 100 transport officials employed by the society in Scotland.

Handling, loading, selection of the best vehicle for the job, the time factor and maintenance all had to be taken into consideration. The time study engineer could plot and record all these problems for critical analysis, making them dovetail into a proper pattern for smooth operation.

Expert advice should always be sought by, anyone thinking of reorganization, bonus and incentive schemes, or capital expenditure on warehouses and equipment.

CONSULTATIONS between local authorities and Maidstone and District Motor Services, Ltd., resulted in agreement that the frequencies of some Sunday services in Kent and East Sussex could be reduced. This was pointed out before the South Eastern Traffic Commissioners at Maidstone on Tuesday. In only one case had the discussions failed to reach a satisfactory conclusion. Some reductions were necessary if passengers were to travel at reasonable fares.

The trend away from public transport is distressingly heavy, and the future for the bus industry is by no means bright," said Mr. 14. J. Thom, chairman.

Mr. Stanley Smith, traffic manager, said the falling-off in the number of passengers carried by the company was not caused entirely by higher fares. In September this year they carried about 1m. fewer passengers than in September last year, although higher fares were in operation only late in the month. Rural area traffic was dwindling, and Sunday traffic was almost non-existent.

The applications were granted.

A LLEGATIONS of " pirate " operar-Itions by works buses are to be put before the South Eastern Traffic Commissioners by Reading Transport Committee. They claim that vehicles hired by companies to take employees to and from work are having an adverse effect on the undertaking's revenues, which are already causing concern.

Clic D. L. Stoddart, chairman of the committee, told the town council that these buses were picking up passengers at various points along corporation routes. The corporation had an obligation to provide early morning and evening services for workers, but many people were transferring to the hired vehicles.