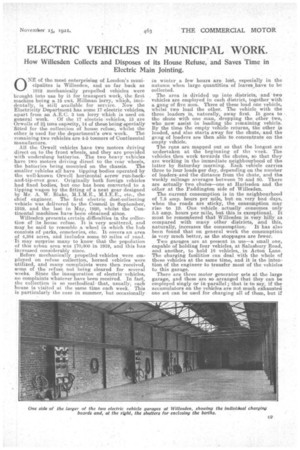 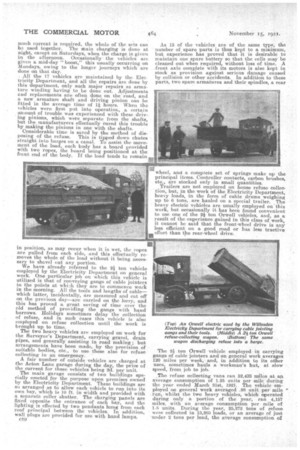 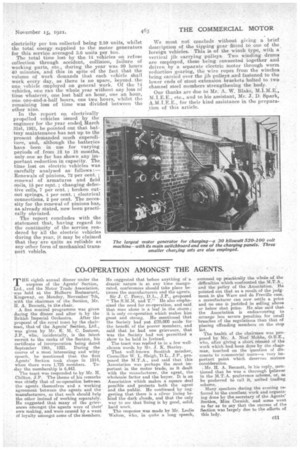 Page 9, 15th November 1921 — ELECTRIC VEHICLES IN MUNICIPAL WORK.
Close
Noticed an error?
If you've noticed an error in this article please click here to report it so we can fix it.
Keywords : Alternative Propulsion, Electric Vehicles, Electrification, Fuel Economy In Automobiles

How Willesden Collects and Disposes of its House Refuse, and Saves Time in Electric Main Jointing.

0 —NE of the most enterprising of London's municipalites is Willesden, and so far back as 1912 mechanically propelled vehicles were brought into use by it for transport work, the first machine being a 15 ewt. Hillman lorry, which, incidentally, is still available for service. Now the Electricity Department has some 17 electric vehielers, apart from an A.E.C. 3 ton lorry which is used on general work. Of the 17 electric :vehicles, 15. are Orwells of 2i tons capacity, 14 of these beingespecially 'fitted for the collection of house refuse, whilst the other is used for. the department's Own work. The remaining two vehicles are 4-5 for ners of Continental manufacture.

All the Orwell vehicles have two motors driving direct on to the front wheels, and they are provided with underslung batteries. The two heavy vehicles have two motors driving direct to the 'rear wheels, the batteries being mounted on the chassis. The smaller vehicles all have tipping bodies operated by the well-known Orwell horizontal screw run-hackand-tip-over, gear. Originally both foreign vehicles had fixed. bodies, but one has been converted to a tipping wagon by the fitting of a neat gear designed by Mr. A. W. Blake, M.I.M.E., NITRE., etc., the chief engineer. The first electric dust-collecting vehicle was delivered to tho Council in September, 1919, and the last in May, 1920, whilst the Continental machines have been obtained since.

Willesden presents certain difficulties in the collection of its house refuse. It is very scattered, and may be said to resemble a wheel in which the hub consists of parks, cemeteries, etc: It covers an area of 4,384 acres, and includes some 80 miles of road. It may surprise many to know that the population of this urban area was 170,000 in 1919, and this 'Lae increased considerably since.

Before mechanically propelled vehicles were employed on refuse collection, horsed vehicles were utilized, and many complaints were then received, some of the' refuse not being cleared for several weeks. Since the inauguration of electric vehicles, no complaints whatever have been received. In Met, the collection is so methodical' that, usually, each house is visited at the same time each week. This is particularly the -ease in summer, but occasionally

in winter a few hours are lost, especially in the autumn when large quantities of leaves have to be collected.

The area is divided up into districts, and two vehicles are employed in each district, together with a gang of five men. Three of these load one vehicle, whilst two load the other. The vehicle with the three loaders is, naturally, away first. It goes to the chute with one man, dropping the other two, who now assist in loading the remaining vehicle. By the time the empty vehicle returns, the other is loaded, and also starts away for the chute,, and the "gang of loaders are then able to concentrate on the empty vehicle.

The runs are mapped out so that the longest are undertaken at the beginning of the week. The vehicles then work towards the chutes, so that they are working in the immediate neighbourhood of the latter by Saturday morning. •Each vehicle carries three to four loads per day, depending on the number of loaders' and the distance from the chute, and the weekly mileage averages between 70 and 80. There are actually two chutes—one at Harlesden and the other at the Paddington side of Willesden.

Two garages are at present in use—a small one, capable of holding four vehicles, at Salusbury Road, and another, to hold 16 vehicles„ in Acton Lane. The charging facilities can deal with the whole of these vehicles at the same time, and it is the intention of the engineer to transfer most of the vehicles to this garage.

There are three motor generator sets at the large garage, and these are so arranged that they can be employed singly or in parallel ; that is to say, if the accumulators on the vehicles are not much exhausted one set can be used for charging all of them, but if much current is required, the whole of the sets can be used together. The shain charging is done at night, except on Saturdays, when the charge is given in the afternoon. Occasionally • the vehicles are given a mid-day "boost," this usually occurring on Mondays, owing to the longer journeys which are done on that day.

. All the 17 vehicles are maintained by the Electricity Department, and all the repairs are done by this 'department, only such major repairs as armature winding having to be done out. Adjustments and replacements are often done on the road, and a new armature shaft and driving pinion can be fitted in the average time of a hours. When the vehicles were first put into operation, a certain aniount of trouble was experienced with these driving pinions, which were separate from the shafts, but the manufacturers effectually cured this trouble by making the pinions in one with the shafts. Considerable time is saved by the method of disposing of the refuse. This is tipped down chutes straight into barges on a canal. To assist. the movement of the load each body has a board provided with two ropes, the hoard being positioned at the front end of the body. If the load tends to remain in position, as may occur when it is wet, the ropes are pulled from each side, and this effectually removes the whole of the load without it being necessary to shovel out any portion.

Ilife have already referred to the 24 ton vehicle employed by the Electricity Department on general work. One particular job on which this vehicle is utilized is that of conveying gangs of cable jointers to the points at whisk they are to commence work in the morning. All the tools and lengths of cable— which latterl incidentally, sire measured and cut off on the previous day—are carried on the lorry, and this has proved a great saving of time over the old method of providing the gangs with hand barrows. Holidays sometimes delay the collection of refuse, and in such cases this vehicle is also employed on refuse collection until the work is brought up to time.

The two heavy vehicles are employed on work for the Surveyor's Department, carrying gravel, drain pipes, and generally assisting in road making ; but arrangements have been made, by the provision of suitable bodies, etc., to use these also for refuse collecting in an emergency. A fair number of outside vehicles are charged at the Acton Lane garage during the day, the price of the current for these vehicles being 2d. per unit. The main garage consists of two buildings specially erected for the purpose upon premises owned by the Electricity Department. These buildings are so arranged as to allow each vehicle to run into its own bay, which is 10 ft. in width and provided with a separate roller shutter. The charging panels are fixed opposite the entrance of each bay, and the lighting is effected by two pendants hung from each roof principal between the vehicles. In addition, wall plugs are provided for use with hand lamps. OW As 15 of the vehicles are of the same type, the number of spare parts ia thus kept to a minimum, but experience has proved that it is desirable to maintain one spare battery so that the cells may he cleaned out when required, without loss of time. A front axle complete with its motors is also kept in stook as provision against serious damage caused by collision or other accidents. In addition to these parts, two spare armatures and their spindles, a rear wheel, and a complete set of springs make up the principal items. Controller contacts, carbon brushes, etc., are stocked only in small quantities. Trailers are not employed on house refuse collection, but, in the work of the Electricity Department, heavy loads, in the form of cable drums weighing up to G tons, are hauled on a special trailer. The heavy electric vehicles are usually employed on this work, but occasionally it has been found convenient to use one of the 2i ton Orwell vehicles, and, as a result of the experience gained in this class of work, it cannot be said that the front-wheel drive is any less efficient on a good road or has less tractive effort than the rear-wheel drive.

The 24 ton Orwell vehicle employed in carrying gangs of cable jointers and on general work averages 120 miles per week, and, in addition to its other uses, sometimes hauls a workman's hut, at slow speed, from job to job.

electricity per ton collected being 2.59 units, whilst the total energy supplied to the motor generators for this service averaged 3.6 units per ton.

The total time lost by the 14 vehicles on refuse collection through accident, collision, failure of working parts, etc., during the year was 99 hours 40 minutes, and this in spite of the fact that the volume of work demands that each vehicle shall work every day, as there is no spare, beyond, the one vehicle employed on general work. Of the 14 vehicles, one rap the whole year without any loss of time whatever, one lost half an hour, one an hour, one one-and-a-half hours, one two hours, whilst the remaining loss of time was divided between the other nine.

In, the report on electrically propelled vehicles issued by the engineer for the year ended, March 31st, 1921, he pointed out that battery maintenance has not up to the present demanded much ex,penditure, and, although the batteries have been in use for varying periods of from 12 to 18 months, only one so far has shown any important reduction in capacity. The time lost on electric vehicles was carefully analysed as follows:— Renewals of pinions, 72 per cent. ; renewal of armatures and field coils, 15 per cent. ; changing defective cells, 7 per cent. ; broken cutout springs, 4 per cent. ; electrical connections, 2 per cent. The necessity for the renewal of pinions has, as already stated, now been practically obviated.

The report concludes with the statement that, having regard to the continuity of the service rendered by all the electric vehicles during the year, it may be claimed that they are quite as reliable as any other form of mechanical transport vehicle. We must not conclude without giving a brief description of the tipping gear -fitted to one of the foreign vehicles. This is of the winch type, with a vertical jib carrying pulleys. Two winding drums are employed, these being connected together and driven by a separate electric motor through worm reduction gearing, the wire ropes from the winches being carried over the jib pulleys and fastened to the lower ends of stout extension brackets bolted to two channel steel members strengthening the body.