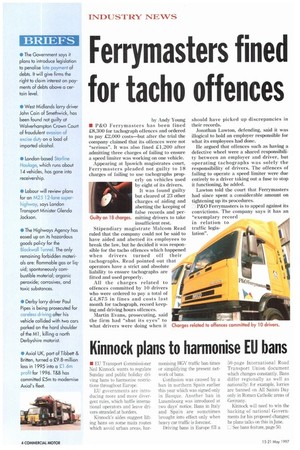 Page 6, 15th May 1997 — Kinnock plans to harmonise EU bans
Close
Noticed an error?
If you've noticed an error in this article please click here to report it so we can fix it.
Keywords : Life Peers, Neil Kinnock, Ban, Environment

Confusion was caused by a ban in northern Spain earlier this year which was signed only in Basque. Another ban in Luxembourg was introduced at two days' notice. Bans in Italy and Spain are sometimes brought into effect only when heavy car traffic is forecast.

Driving bans in Europe fill a 50-page International Road Transport Union document which changes constantly. Bans differ regionally as well as nationally: for example, lorries are banned on All Saints Day only in Roman Catholic areas of Germany.

Kinnock will need to win the backing of national Governments for his proposed changes; he plans talks on this in June.