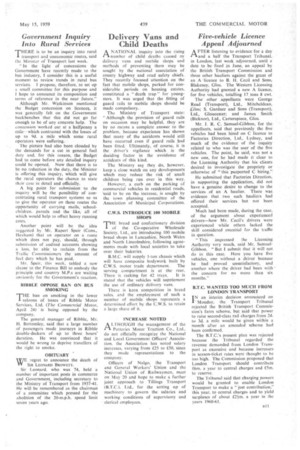 Page 45, 15th May 1959 — Five-vehicle Licence Appeal Adjourned
Close
Noticed an error?
If you've noticed an error in this article please click here to report it so we can fix it.
Keywords : British Transport Commission, Law / Crime, Business / Finance

AFTER listening to evidence for a day and a half the Transport Tribunal, in London, last week adjourned, until a date to be fixed in June, an appeal by the British Transport Commission and three other hauliers against the grant of an A -licence to B. H. Cecil and Sons, Blakeney, Glos. The Western Licensing Authority had granted a new A licence, for five vehicles, totalling 17 tons 8 cwt.

Mr. J. R. C. Samuel7Gibbon, for the. appellants, said that previously the five vehicles had been hired on C licence to Factories Direction, Ltd., Lydney, and much of the evidence of the inquiry related to who was the user of the five vehicles, The point, he said, was not a new one, for he had made it dear to the Licensing Authority that his clients desired to investigate the propriety or otherwise of " this'.purported C hiring,"

He submitted that Factories Direction, in supporting the application, did not have a genuine desire to change to the services of an A haulier. There was evidence that two such hauliers had offered their services but not been accepted.

Much had been made, during the case, of the argument about experienced drivers—how Mr. Cecil's drivers were experienced while others lacked the skill considered essential for the traffic in question.

"This impressed the Licensing Authority very much, said Mr. SamuelGibbon. "But I submit that it will not do in this case. Here you have five vehicles, one without a driver because he had • proved unsatisfactory, and another where the driver had been with the concern for no more than six months."

B.T.C. WANTED TOO MUCH FROM LONDON TRANSPORT

I N an interim decision announced on -Monday, the Transport Tribunal rejected the British Transport Commission's fares scheme, but said that power to raise second-class rail charges from 2d. to 3d. a mile would be given within a month after an amended scheme had been confirmed.

The B.T.C.'s present plan was rejected because the Tribunal regarded the revenue demanded from London Transport as excessive and because increases in season-ticket rates were thought to be too high. The Commission proposed that London Transport should contribute £6m. a year to central charges and .E5rn. to reserve.

The Tribunal said that charging powers would be granted to enable London Transport to make a "just contribution," this year, to central charges and to yield surpluses of about f2'7m. a year in the years 1960-61.