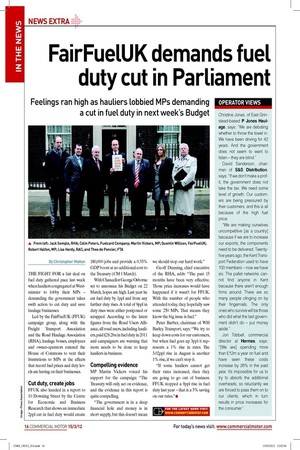 By Christopher Walton THE FIGHT FOR a fair deal on fuel duty gathered pace last week when hauliers congregated at Westminster to lobby their MPs – demanding the government takes swift action to cut duty and save haulage businesses.

Led by the FairFuelUK (FFUK) campaign group, along with the Freight Transport Association and the Road Haulage Association (RHA), haulage bosses, employees and owner-operators entered the House of Commons to vent their frustrations to MPs at the effects that record fuel prices and duty levels are having on their businesses.

FFUK also handed in a report to 10 Downing Street by the Centre for Economic and Business Research that shows an immediate 2ppl cut in fuel duty would create 180,000 jobs and provide a 0.33% GDP boost at no additional cost to the Treasury (CM 1 March).

With Chancellor George Osborne set to announce his Budget on 22 March, hopes are high. Last year he cut fuel duty by 1ppl and froze any further duty rises. A total of 9ppl in duty rises were either postponed or scrapped. According to the latest igures from the Road Users Alliance, all road users, including hauliers, paid £26.2bn in fuel duty in 2011 and campaigners are warning that more needs to be done to keep hauliers in business.

MP Martin Vickers voiced his support for the campaign: “The Treasury will only act on evidence, and the evidence in this report is quite compelling.

“The government is in a deep inancial hole and money is in short supply, but this doesn’t mean we should stop our hard work.” Geoff Dunning, chief executive of the RHA, adds: “The past 15 months have been very effective. Those price increases would have happened if it wasn’t for FFUK. With the number of people who attended today, they hopefully saw some 250 MPs. That means they know the big issue is fuel.” Peter Barber, chairman of WH Barley Transport, says: “We try to keep down costs for our customers, but when fuel goes up 3ppl it represents a 1% rise in rates. The 3.02ppl rise in August is another 1% rise, if we can’t stop it.

“If some hauliers cannot get their rates increased, then they are going to go out of business. FFUK stopped a 9ppl rise in fuel duty last year – that is a 3% saving on our rates.” n