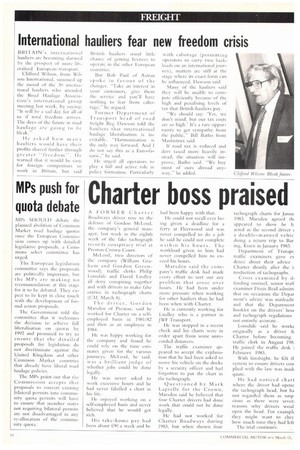 Page 14, 15th March 1986 — MPs push for quota debate
Close
Noticed an error?
If you've noticed an error in this article please click here to report it so we can fix it.

The European legislation committee says the proposals are politically important, but the MPs are making no recommendation at this stage for it to be debated. They expect to be kept in close touch with the development of formal action proposals.

The Government told the committee that it welcomes the decision to achieve full liberalisation on quotas by 1992 and promised to try to ensure that the detailed proposals for legislation do not discriminate against the United Kingdom and other Common Market countries that already have liberal road haulage policies.