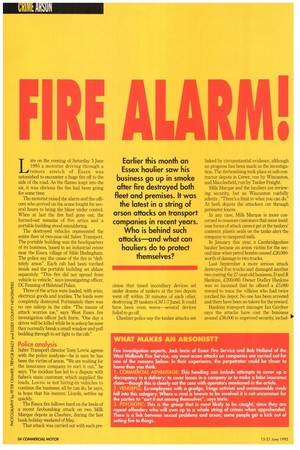 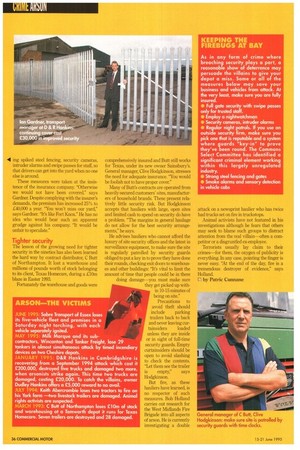 Page 36, 15th June 1995 — ALARM
Close
Noticed an error?
If you've noticed an error in this article please click here to report it so we can fix it.
Keywords : Security, Public Safety, Prevention, Security Guard

Tate ate on the evening of Saturday 3 June 1995 a motorist driving through a remote stretch of Essex was astonished to encounter a huge fire off to the side of the road_ As the flames leapt into the air, it was obvious the fire had been going for some time.

The motorist raised the alarm and fire officers who arrived on the scene fought for several hours to bring the blaze under control. When at last the fire had gone out, the burned-out remains of five attics and a portable building stood smouldering.

The destroyed vehicles represented the entire fleet of two-year-old Sabre Transport. The portable building was the headquarters of its business, based in an industrial estate near the Essex village of Sible Hedingham. The police say the cause of the fire is "definitely arson". Each cab had been torched inside and the portable building set ablaze separately. "This fire did not spread from vehicle to vehicle: says investigating officer, DC Fenning of Halstead Police.

Three of the artics were loaded, with wine, electrical goods and textiles. The loads were completely destroyed. Fortunately there was no one asleep in the cabs. "The means of attack worries me," says West Essex fire investigation officer Jack Imrie. "One day a driver will be killed while he is asleep because they normally break a small window and pull bedding through to set light to the cab."

Police analysis Sabre Transport director Tony Lovric agrees with the police analysis—he is sure he has been the victim of arson. "We are waiting for the insurance company to sort it out," he says. The incident has led to a dispute with Sabre's main customer, which supplied the loads. Lovric is not hiring-in vehicles to continue the business; all he can do, he says, is hope that his insurer, Lloyds, settles up quickly.

The Essex fire follows hard on the heels of a recent firebombing attack on two Milk Marque depots in Cheshire, during the last bank holiday weekend of May.

That attack was carried out with such pre

cision that timed incendiary devices set under dozens of tankers at the two depots went off within 20 minutes of each other, destroying 29 tankers (CM 1-7 June). It could have been even worse—several devices failed to go off.

linked by circumstantial evidence, although no progress has been made in the investigation. The firebombing took place at sub-contractor depots in Crewe, run by Wincanton, and Macclesfield, run by Tanker Freight.

Milk Marque and the hauliers are reviewing security, but as Wincanton ruefully admits, "There's a limit to what you can do." At both depots the attackers cut through perimeter fences.

In any case, Milk Marque is more concerned to reassure customers that more insidious forms of attack cannot get at the tankers' contents: plastic seals on the tanks alert the company to tampered milk.

In January this year, a Cambridgeshire haulier became an arson victim for the second time when petrol bombs mused £20,000worth of damage to two trucks.

Last September a more serious attack destroyed five trucks and damaged another two costing the 27-year-old business, D and R Hankins, £200,000. Owner Dudley Hankins was so incensed that he offered a £5,000 reward to trace the villains who had twice torched his depot. No one has been arrested and there have been no takers for the reward.

Hankins transport manager Ian Gardner says the attacks have cost the business around 4:30,000 in improved security, includ111' 41 ing spiked steel fencing, security cameras, intruder alarms and swipe passes for staff, so that drivers can get into the yard when no one else is around.

These measures were taken at the insistence of the insurance company. "Otherwise we would not have been covered," says Gardner. Despite complying with the insurer's demands, the premium has increased 25% to 140,000 a year. "You won't miss our yard," says Gardner. "It's like Fort Knox." He has no idea who would bear such an apparent grudge against his company. "It would be unfair to speculate."

The lesson of the growing need for tighter security in the nineties has also been learned the hard way by contract distributor, C Butt of Northampton. It lost a warehouse and millions of pounds worth of stock belonging to its client, Texas Hornecare, during a ilOm blaze in Easter 1993.

Fortunately the warehouse and goods were

comprehensively insured and Butt still works for Texas, under its new owner Sainsbury's. General manager, Clive Hodgkinson, stresses the need for adequate insurance. "You would be foolish not to have proper cover."

Many of Butt's contracts are operated from heavily-secured customers' sites, manufacturers of household brands. These present relatively little security risk. But Hodgkinson accepts that hauliers with large, open sites and limited cash to spend on security do have a problem. "The margins in general haulage do not allow for the best security arrangements," he says.

He advises hauliers who cannot afford the luxury of site security offices and the latest in surveillance equipment, to make sure the site is regularly patrolled by security guards obliged to put a key in to prove they have done their rounds, checking exit doors to warehouses and other buildings: "It's vital to limit the amount of time that people could be in there doing damage—you must make sure they get picked up within 10-15 minutes of being on site."

Precautions to avoid theft should include parking trailers back to back and never leaving cur tainsiders loaded unless they are inside or in sight of full-time security guards. Empty curtainsiders should be open to avoid slashing to check the contents. "Let them see the trailer is empty;" says Hodgkinson.

But fire, as these hauliers have learned, is no respecter of such measures. Bob Holland carries out research for the West Midlands Fire Brigade into all aspects of arson. He is currently investigating a double

attack on a newsprint haulier who has twice had trucks set on fire in truckstops.

Animal activists have not featured in his investigations although he fears that others may seek to blame such groups to distract attention from the real villain—often a competitor or a disgruntled ex-employee.

Terrorists usually lay claim to their crimes—for them, the oxygen of publicity is everything. In any case, pointing the finger is never easy. "At the end of the day, fire is a tremendous destroyer of evidence," says Holland.