The Transition from Tram to Bus 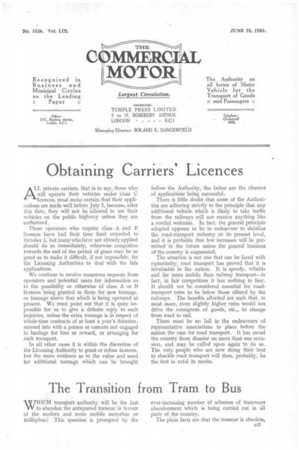 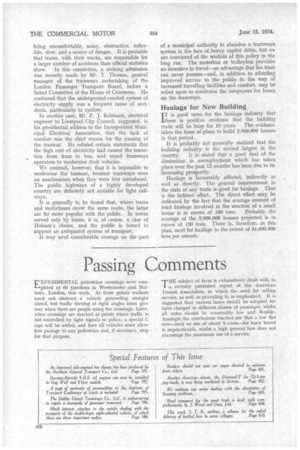 WHICH transport authority will be the last to abandon the antiquated tramcar in favour of the modern and more mobile motorbus or trolleybus? This question is prompted by the ever-increasing number of schemes of tramways abandonment which is being carried out in all parts of the country.

The plain facts are that the tramcar is obsolete, being uncomfortable, noisy, obstructive, inflexible, slow, and a source of danger. It is probable that trams, with their tracks, are responsible for a larger number of accidents than official statistics show. In this connection, a striking admission was recently made by Mr. T. Thomas, general manager of the tramways undertaking of the London Passenger Transport Board, before a Select Committee of the House of Commons. He confessed that the underground-conduit system of electricity supply was a frequent cause of accidents, particularly to cyclists.

In another case, Mr. P. J. Robinson, electrical engineer to Liverpool City Council, suggested, in his presidential address to the Incorporated Municipal Electrical Association, that the lack of comfort was the chief reason for the passing of the tramcar. He refuted certain statements that the high cost of electricity had caused the transifion from tram to bus, and urged tramways operators to modernize their vehicles.

We contend, however, that it is impossible to modernize the tramcar, because tramways were an anachronism when they were first introduced. The public highways of a highly developed country are definitely not suitable for light railways.

It is generally to be found that, where trams and motorbuses cover the same route, the latter are far more popular with the public. In towns served only by trams, it is, of course, a case of Hobson's choice, and the public is forced to support an antiquated system of transport.

It may need considerable courage on the part of a municipal authority to abandon a tramways system in the face of heavy capital debts, but we are convinced of the wisdom of this policy in the long run. The motorbus or trolleybus provides an incentive to travel—an advantage that the tram can never possess—and, in addition to affording improved service to the public in the way of increased travelling facilities and comfort, may be relied upon to reimburse the ratepayers for losses on the tramways.

Haulage for New Building I T is good news for the haulage industry that there is positive evidence that the building trade will be busy for 10 years. The evidence takes the form of plans to build 2,000,000 houses in that period. It is probably not generally realized that the building industry is the second largest in the country. It is stated that a good deal of the diminution in unemployment which has taken place over the past 12 months has been due to its increasing prosperity. Haulage is favourably affected, indirectly as well as directly. The general improvement in the state of any trade is good for haulage. That is the indirect effect. The direct effect may be indicated by the fact that the average amount of road haulage involved in the erection of a small house is in excess of 100 tons. Probably the average of the 2,000,000 houses projected is in excess of 120 tons. There is, therefore, in this plan, need for haulage to the extent of 24,000,000 tons per annum.