Newport Fares Revenue Not Up to Expectations 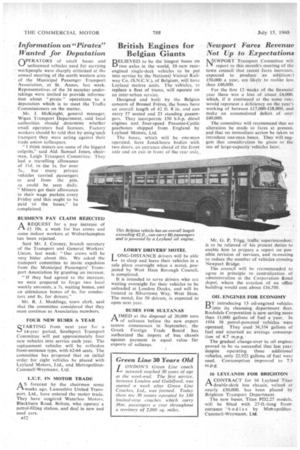 Page 46, 15th July 1960 — Newport Fares Revenue Not Up to Expectations
Close
Noticed an error?
If you've noticed an error in this article please click here to report it so we can fix it.
Keywords : Buses, Double-decker Buses, Leyland Titan, Business / Finance

MEWPORT Transport Committee wit) J.14 report to this month's meeting of the town council that recent fares increases, expected to produce an additionet 150,000 a year, are likely to realize less than £40,000.

The committee will recommend that no alteration be made to fares at present, and that no immediate action be taken to introduce one-man buses. They will suggest that consideration be given to the use of large-capacity vehicles later.

Mr. O. P. Trigg, traffic superintendent, is to be relieved of his present duties to enable him to prepare a report on -Possible revision of services, and re-routing to reduce the number of vehicles crossing Newport Bridge. • The council will he recommended to agree in principle to Centralization of administration at the Corporation Road depot, where the erection of an office building would cost about .Z16,500.

BY introducing 13 oil-engined vehicles into its cleansing department fleet, Rochdale Corporation is now saving more than 11,000 gallons of fuel a year. In 1954 30 petrol-powered vehicles were operated. They used 34,334 gallons of fuel and returned an average consumption of 4.7 m.p.g..

The gradual change-over to oil engines proved to be so successful that last year, despite operating three additional vehicles, only 22,922 gallons of fuel were used. Consumption improved to 7.3 m.p.g.