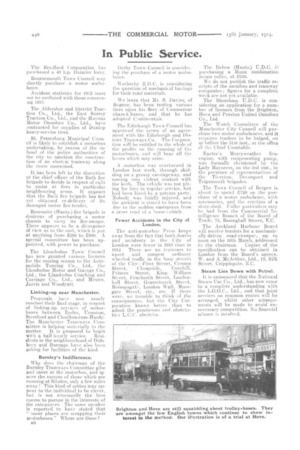 The Bradford Corporation has purchased a. 40 h.p. Daimler lorry.

Accident statistics for 19[2 must not be confused with those concernrig 1913.

St. Petersburg Municipal Council is likely to establish a motorbus undertaking, by reason of the refusal of the police authorities of the city to sanction the construction of an electric tramway along the route concerned.

Boscombe (Hants.) fire brigade is desirous of purchasing a motor chassis to carry its fire-escape. There appears to be a divergence of view as to the cost, which is put at anything from 1!200 to 2600. A special committee has been appointed, with power to purchase.

Proposals have now nearly reached their final stage, in respect of linking-up services of motorbuses between Eccles, Urmston, Stretford and Chorlton-cum-Ffardy. The Manchester Tramways Committee is helping materially in the matter. It is proposed to begin with a half-hourly service. Resi

dents in the neighbourhood of Didsbury and Burnage have also been asking for facilities of the kind.

Why does the chairman of the Burnley Tramways Committee gibe and sneer at the motorbus, and ignore the success of those which are running at Silsden, only a few miles away ? This kind of action may appear to the individual to be clever, but is not necessarily the best course to pursue in the interests of the ratepayers. The same speaker is reported to have stated that " many places are scrapping their motorbuses." Where are these? Derby Town Council is consider_ ing the purchase of a motor ambulance.

Wether by It D.C. is considering the question of mechanical haulage for their road materials.

We learn that Mr. S. Davies, of Bognor, has been testing various tires upon his fleet of Commercar chars-it banes, and that he has adopted Continentals.

The Edinburgh Town Council has approved the terms of an agreement with the Edinburgh and District Tramways Co. The Corporation will he entitled to the whole of the profits. on the running of the motorbuses, and will bear all the losses which may arise.

A motorbus was overturned in London last week, through skidding on a greasy carriageway, and coming into violent contact with the kerb. The vehicle was not plying f,or hire in regular service, but had been hired by a private party. Nobody was fatally injured, and the accident is stated to have been due to the sudden emergence from a CMs.. road of a horse-vehicle.

Fewer Accidents in the City of London.

The anti-motorbus Press keeps away from the fact that both deaths and accidents in the City of London were fewer in 1913 than in 1912. There are no ti aincars to upset and congest ordinary wheeled traffic in the busy streets of the City—Fleet Street, Cannon

We do not .publish the traffic receipts of the omnibus and tramway. companies; figures for a complete week are not yet available.

The Shoreham U.D.C. is considering an application for a. number of licences from the Brighton. Hove and Preston United Omnibus Co., Ltd.

The Watch Committee of the Manchester City Council will purchase two motor ambulances, and it requires tenders to be lodged, on or before the 31st inst., at the office of the Chief. Constable.

Exeter's Merryweather fireengine, with reciprocating pump, was formally christened by the Lady Mayoress, on the 3rd inst., in the presence of representatives of the Tiverton, Devonport and Teignmouth brigades.

The Town Council of Bergen is about to spend £720 on the purchase of a motor ambulance., Nvith accessories, and the erection of a store-shed. Fuller particulars may be had from the Commercial Intelligenee Branch of the Board oi Trade, 73, Basingliall Street, B.C.

The Auckland Harbour Board will receive tenders for a mechanically-driven road-sweeper, up to noon on the 10th March, addressed to the chairman. Copies of the specification can be obtained in London from the Board's agents, W. and A. McArthur, Ltd., 18, Silk Street, Cripplegate, E.C.

Steam Lies Down with Petrol.

It is announced that the National Steam Car Co., Ltd., has now come to a complete understanding with the L.O.O.C., Ltd., and that joint services on common routes will be arranged, whilst other arramjements will be made to avoid unnecessary competition. No financial scheme is involved.