THE TRACTOR TRADE IN HUNGARY. 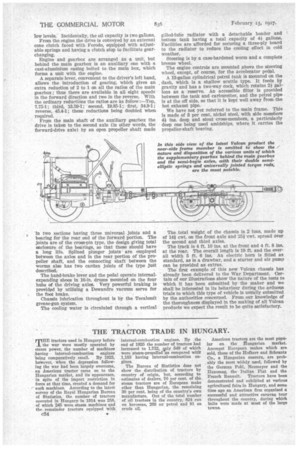 Page 56, 15th February 1927 — THE TRACTOR TRADE IN HUNGARY.
Close
Noticed an error?
If you've noticed an error in this article please click here to report it so we can fix it.

THE tractors used in Hungary before the war were mostly operated by steam power, the number of machines having internal-combustion engines being comparatively small. By 1923, however, When the depression following the war had been largely overcome, an American tractor came on to the Hungarian market, and its appearance, in spite of the import restriction in force at that time, created a demand for such machines. According to the latest survey of the Royal Hungarian Bureau of Statistics, the number of tractors operated in Hungary in 1914 was 258, of which 246 were steam machines and the remainder tractors equipped with cS4 •

The Bureau of Statistics does not show the distribution of tractors by country of origin, but, according to estimates of dealers, 70 per cent. of the steam tractors are of European make other than Hungarian, the remaining 30 per cent, being of the country's own manufacture. Out of the total number of oil tractors in the country, 824 run on kerosene, 208 on petrol and 91 on crude oil.

American tractors are the most pbruilar on the Ilungarian market. Amongst European makes which are sold, those of the Hofherr and Schmaltz Co., a Hungarian concern, are probably the most widely used, followed by the German Pohl, Neumayer and the Hanomag, the Italian Fiat and the French Renault. Tractors have been demonstrated and exhibited at various agricultural fairs in Hungary, and some time ago an American firm organized a successful and attractive caravan tour throughout the country, during which halts were made at most of the large towns.