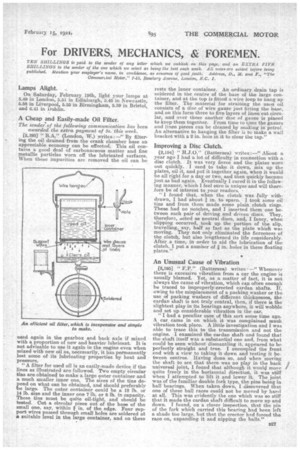 Page 31, 15th February 1921 — For DRIVERS, MECHANICS, & FOREMEN
Close
Noticed an error?
If you've noticed an error in this article please click here to report it so we can fix it.

TEN SHILLINGS is paid to the sender of any letter which we publish on this page, and an EXTRA FIVE SHILLINGS to the sender of the one which we select as being the .best each week. All notes are edited before being published. Mention your employer's name, in confidence, as evidence of good faith:. Address, D,, .M. and P., "The Commenial Motor," 7-15, Idosebery Avenue, London, EX. 1.

A Cheap and Easily-made Oil Filter.

The sender of the following communication has been awarded the extra payment of 5s. this week.

, ing the oil drained -from the crank chamber base an appreciable economy can be effected. This oil contains a good deal of carbonaceous matter and fine metallic particles worn off the lubricated surfaces. When these impurities are removed the oil can . be used again in the gearbox and back axle if mixed with a proportion of new and heavier lubricant. It is not advisable -to use it again in the engine even when mixed with new oil as, necessarily, it has permanently lost some of its lubricating properties by heat and pressure. "A filter for used oil is an easily-made device if the lines as illustrated are followed. Two empty circular tins are obtained to make a large outer container and a much smaller inner one. The sizes of the tins depend on what can be obtained, and should preferably 'be large, The outer container could be a 12 lb. or 14 lb. size and the inner one 7 lb. or 8 lb. in capacity. These tins must be quite oil-tight, and should be tested. Out a circular piece out of the base of the small one, say, within in. of the edge. Four support wires passed through small holes are soldered at a suitable level in the large container, and on these

rests the inner container. An ordinary drain tap is soldered in the centre of the base of the large container, and at the top is fitted a wire loop to hang up the filter. The material for straining the usea oil consists of a disc of wire gauze just fitting the base, and on this form three to five. layers of linencut circular, and over these another disc of gauze is placed to keep them together. From time to time the gauzes and linen pieces can be cleaned by soaking in petrol. An alternative to hanging the filter is to make a wall bracket with a 2 in. hole in it to clear the tap."

(2,194] " EI.J.0." (Battersea) writes:—" Aliout • a year ago I had a lot of difficulty in connection with a disc clutch. It was very fierce and t'ne plates wore out quickly. I used to take it down, mix up the plates, oil it, and put it together again, when it would be all right for a day or two, and then quickly become just as bad again. Eventually I cured it in the following manner, which I feel sure is unique and will therefore be of interest to your readers.

"I found that, when ' the clutch was fully withdrawn, I had about 1 in. to spare. I took some oil tins and from them made some plain, clutch rings. These had no notches, and I inserted them one between each pair of driving and driven discs. They, therefore, acted as neutral discs, and, I fancy, when slipping occurred, took up the portion of the slip, travelling, say, half as fast as the plate which was moving. They not only eliminated the fierceness of the clutch, but also lengthened its life considerably. After a time, in order to aid the lubrication of the clutch. I put a number of in. holes in these floating plates."

An Unusual Cause of Vibration

[2,195] " F.P." (Battersea) writes'—" Whenever there is excessive vibration from a car the engine is usually blamed. Yet, as a matter of fact, it is not always the cause of vibration, which can often enough be traced to improperly-erected cardan shafts. If, owing to the misplacement of a packing washer or the use of packing washers of different thicknesses, the cardan shaft is not truly central, then, if there its the slightest play in its bearings aaywhere, it will wobble and set up considerable vibration in the car.

"I had a peculiar case of this sort some time ago. A car came in on which it was complained

vibration took place. A little investigation and I was able to trace this to the transmission and not the engine. I examined the cardan shaft and found that the shaft itself was a substantial one and, from what could be seen without dismantling it, appeared to be perfectly straight and true. I uncoupled the front end with a view to taking it down and testing it between centres. Having done so, and when moving the shaft to see that there was no play in the back universal joint, I found that although it would move quite freely in the horizontal direction, it was stiff when I attempted to lift it and lower it. The joint was of the familiar double fork type, the pine being in ball bearings. When taken down, I discovered that one of these ball races could not be moved by hand at all. This was evidently the one which was so stiff that it made the cardan shaft difficult to move up and dawn. T found, on a closer inspection, that the pin of the fork which carried this bearing had been left a shade too large, but that the erector had forced the race on, expanding it and nipping the balls."