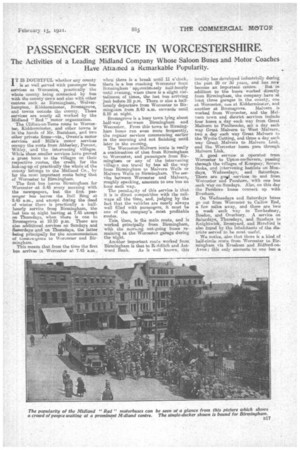 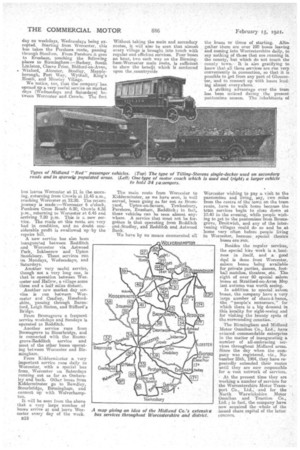 Page 21, 15th February 1921 — PASSENGER SERVICE IN WORCESTERSHIRE.
Close
Noticed an error?
If you've noticed an error in this article please click here to report it so we can fix it.
Keywords : Worcester, Midland Red, Hereford And Worcester

The Activities of a Leading Midland Company Whose Saloon Buses and Motor Coaches Have Attained a Remarkable Popularity.

I T IS DOUBTFUL whether any county

is so well served with passenger bus services as Worcester, practically the whole county being connected by bus with the county town and also with other centres such as Birmingham, Wolverhampton, Kidderminster, Bromegrove, and towns outside the county. These (services are nearly all worked by the Midland " Red " motor organization. The Cliftoneon-Teme route to Worcester, Kidderminster, and other towns is in the hands of Mr. Burnham, and two other private firms—viz., Owens's motor services and Mill's motor services occupy the route from Aibberley, Pensag, Willey, and the intervening villages. While these smaller services have proved a great boon to the villages on their respective routes the credit for the linking-up of practically the whole of the county belongs to the Midland Co., by far the most important route being that of Worcester to Birmingham.

The first bus leaves Birmingham for Worcester at 5.45 every morning with the newspapers, but the first passenger bus leaves the Bull Ring at 8.45 a.m., and except during the dead of winter there is practically a halfhourly service from Birmingham, the ket bus at night leaving at 7.45 except on Thursdays, when there is one to Bremsgrove at 10.50 p.m. There are also additional services on Sundays and Se(turdays and on Thursdays, the latter being principally for the accoma-noelation of taeatre-goers to 'Worcester and Bir• ming,harn.

This means that from the time the first bus arrives in Worcester ae.. 7.45 a.m.,

when there is a break until 11 o'clock, there is a bus reaching Worcester from Birmingham approximately half-hourly until evening, when there is a slight curtailment of times, the last bus arriving just before 10 p.m. There is also a halfhourly departure from Worcester to Birmingaara from 8.40 a.m, onwards until 8.10 at night. Brornsgrove is a blew town lying about half-way boween 'Birmingham and Worcester.. From this town to Birmingham buses run even more frequently, the regular services commencing earlier in the morning and not finishing until later in the evening. The Worcester-Malvern route is really a continuation of that from Birmingham to Worcester, and passengers from Birmingham or any of the intervening villa.gcs can travel by bus all the way from Birmingham to Malvern Wells or Malvern Wells to Birmingham. The service between Worcester and Malvern, roughly speaking, amounts to one bus an hour each way.

The peoulieeity of this service is that it is in direct competition with the railways all the time, and, judging by the fact that the vehicles are nearly always well filled with passengers, it must be one of the company's most profitable routes.

This then, is the main route, and is worked principally from Birmingham, with the nsortan.g out-going buses remaining at the Worcester garage during the night.

A good service is operated. team Worcester to Upton-on,Severn, paasing through the villages of Kompsey, Severn Stake, and intervening hex-L.11gs on Mondays, Wednesdays, and Satierdaye. There are gage] services to and from Worcester and Perehere, with one bus each way on Sundays. Also, on this day the Pemba:re buses connect up with Evesha.m.

On Wednesdays and Saturdays buses go out from Worcester to Callow End, a few mike away, and there are two a week each way to Tewkesbury, Bredon, and Overbury. A service on Saturdays, Thursdays, and Sundays to Knightwi, l3romyard, and Hereford is also impel by the inhabitants of the dietricts served to be most useful.

We notice, also that there is a kind of half-circle route freni Worcester to Birmingham via Evetharn and Bidford-onAvon ; this only amounts to one bus a

We notice, too, that the. compete)," has opened up a very useful service on market days. (Wednesdays and Saturdays) between Worcester and .0rowle. The fil'Pt bus leaves Worcester at 11, in the morn. lug, returning from Growl° at 11.45 a.m., reaching Worcester at 12.20. The return journey is made :—Worcester 6 o'clock, Persbore Crass Roads 6.20, Crowle 6.35 p.m., returning to Worcester at 6.45 and arriving 7.20 p.m. This is e„. new service. The reads on this routs are very had in condition, and no doubt considerable profit is swallowed up by the repairs bill. .A 118W service has; also been inaugurated between Redditch and Worcester via Astwood Park, Inkberrow and Upton Snodsleury. These services run en Monday; Wednesdays, and

• Saturdays. Another very useful service, though not a very long one, is that in operation between. Worcester and Hallow, a village some three and a half miles distant.

Another new market day service is run between Worcester and Oradley, Herefordshire, passing through Bernsford, Leigh Sinton, and Stiffordes Bridge. From Rromsgrove a frequent service weekdays and Sundays is operated to ReClditele Another service runs from 13ramsgrove to Sturbridge, and is connected with the Bronasgrove-Redditeh service and most of the other buses operating between Worcester and Birmingham.

From Kidderminster a vary important service runs daily to

Worcester, with a special bus from. Worcester on Saturdays running out as far as Ombers ley and. back. Other buses from Kidderminster go to Bewdley, Stourbriclge„ Birmingham, and connect up with Wolverhampton.

It, will be seen from the above that a very large number of buzee arrive at and leave Worcester every day of the week. B113

Without taking the main and secondary routes, it will also be seen that almost every village is brought into touch with regu.lar and efficient services. Four lenses an hour, two each way on the Birmingham-Worcester main route, is sufficient to show the beneat which is conferred upon the,countryside

The main, route from Worcester to Kidderminster, as we have seen, is well served, buses going as far out as Bromyard, Upton-oneSevern, Tewkesbury, Pershore, Evesham, Redditch; in fact, these vehicles can be seen almost anywhere. A service that must not be forgotten is that operating from Redditch and.Seudley, an Reclditch end Astwood Bank We have by no means enumerated all the 'Sneeze or times of starting. Altogether there are over 100 buses leaving and Coming into Worcestershire daily, to say nothing of these that are running in the county,but which do not touch the county town.It is also gratifying to know that all there services are run very conveniently in ,couriection, so that it is possible to get from any part of Gloucester, and to connect up with buses leading almost everywhere. A striking advantage over the tram has been noticed during the present pantomime season. The inhabitants of Worcester wishing to pay a visit to the pantomime and living, say, two miles from the centre of the town on the tram route, have to walk home because the tram services begin to close down at 10.40 in, the evening, while people wishing to get to the pantomime from Bromsgrove, Droitwich, and any of the intervening villages could do so and be at home very often before people living in Worcester, because special theatre buses are run:

Besides the regular services, the special here work is a .business in . itself, end a, good deal is done from Worcester, saloon buses being available for private parties, dances, football matches, theatres, etc. The sight of over 60 special saloon buses at Stratford-on-Avon Mop last autumn was worth seeing.

In addition to special saloon buees, the company have a very large number of chaes-a-bancs, • the "people's motorcars," for which there is a big demand in this locality for sight-seeing and for visiting the beauty spots of the surrounding counties.

The Birmingham and Midland

Motor Omnibus Co., Ltd., have evinced commendable enterprise in the matter of inaugurating a number of all-embracing services throughout Midland areas. Since the day when the cornpany was registered, viz., No, vember 25th, 1904, they have repeatedly extended their routes until they are now responsible for a, vast network of services. At the present time they are -working a number of services for the Worcestershire Motor Transport Co. Ltd.; and for the North Warwickshire Motor Omnibus and Traction Co., Ltd. ; in fact, the company have now acquired the whole of the issued share capital of the latter concern.