The court of appeal for road hauliers 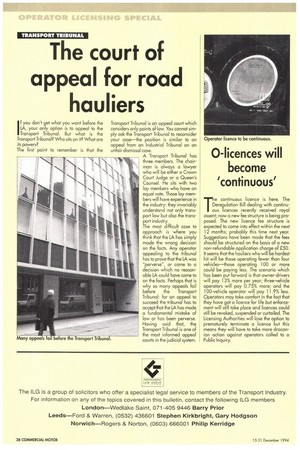 Page 40, 15th December 1994 — The court of appeal for road hauliers
Close
Noticed an error?
If you've noticed an error in this article please click here to report it so we can fix it.

The first point to remember is that the

A Transport Tribunal has three members. The chairman is always a lawyer who will be either a Crown Court Judge or a Queen's Counsel. He sits with two lay members who have an equal vote. Those lay members will have experience in the industry: they invariably understand not only transport law but also the transport industry. The most difficult case to approach is where you think that the LA has simply made the wrong decision on the facts. Any operator appealing to the tribunal has to prove that the LA was "perverse", or came to a decision which no reasonable LA could have come to on the facts. Perhaps that is why so many appeals fail before the Transport Tribunal: for an appeal to succeed the tribunal has to accept that the LA has made a fundamental mistake of law or has been perverse. Having said that, the Transport Tribunal is one of the most informed appeal courts in the judicial system.