A s a transport manager who is unemployed and at 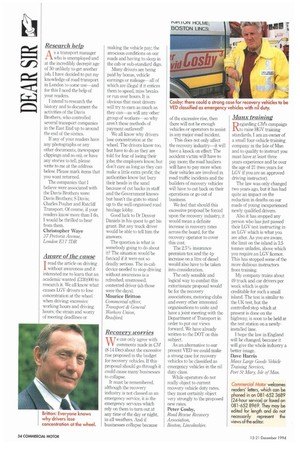 Page 36, 15th December 1994 — A s a transport manager who is unemployed and at
Close
Noticed an error?
If you've noticed an error in this article please click here to report it so we can fix it.
Keywords : Emergency Road Service, Road Transport, Vehicle Recovery, Truck Driver, Large Goods Vehicle, Traffic Collision, Tow Truck, Commercial Driver's License

the incredibly decrepit age of 50 unlikely to get another job, I have decided to put my knowledge of road transport in London to some use—and for this I need the help of your readers.

I intend to research the history and to document the activities of the Davis Brothers, who controlled several transport companies in the East End up to around the end of the sixties.

If any of your readers have any photographs or any other documents, (newspaper clippings and so on), or have any stories to tell, please write to me at the address below. Please mark items that you want returned.

The companies that I believe were associated with the Davis Brothers were: Davis Brothers; S Davis; Charles Pou!ter and Ratcliff Transport. Of course, if your readers know more than I do, I would be thrilled to hear from them.

Aware of the cause

T read the article on driving I without awareness and it interested me to learn that an academic wanted £330,000 to research it. We all know what causes LGV drivers to lose concentration at the wheel when driving: excessive working hours and driving hours; the strain and worry of meeting deadlines or

making the vehicle pay; the atrocious conditions on our roads and having to sleep in the cab or sub-standard digs.

Many drivers are being paid by bonus, vehicle earnings or mileage—all of which are illegal if it entices them to speed, miss breaks or run over hours. It is obvious that most drivers will try to earn as much as they can—as will any other group of workers—so why aren't these methods of payment outlawed?

We all know why drivers lose concentration at the wheel. The drivers know too, but have to do as they are told for fear of losing their jobs; the employers know, but don't care as long as they can make a little extra profit; the authorities know but bury their heads in the sand because of cut backs in staff and the Government knows but hasn't the guts to stand up to the well-organised road haulage lobby.

Good luck to Dr Denver Daniels in his quest to get his grant. But any truck driver would be able to tell him the answers.

The question is what is somebody going to do about it? The situation would be farcical if it were not so deadly serious. The in-cab device needed to stop driving without awareness is a refreshed, unstressed, contented driver (ah those were the days).

We can only agree with comments made in CM (8-14 Dec) about the excessive rise proposed in the budget for recovery vehicles. If this proposal should go through it could cause many businesses to collapse.

It must be remembered, although the recovery industry is not classed as an emergency service, it is the emergency services which rely on them to turn out at any time of the day or night, in all weathers. And if businesses collapse because of the excessive rise, then there will not be enough vehicles or operators to assist in any major road incident.

We feel that should this excessive proposal be forced upon the recovery industry, it would mean a definite increase in recovery rates across the board, for the recovery operator to cover this cost.

The 2.5% insurance premium tax and the 4p increase on a litre of diesel would also have to be taken into consideration.

The only sensible and logical way to combat this extortionate proposal would be for the recovery associations, motoring clubs and every other interested organisations to unite and have a joint meeting with the Department of Transport in order to put our views forward. We have already written to the DOT on this subject. As an alternative to our present VED we could make a strong case for recovery vehicles to be classified as emergency vehicles in the nil duty class.

While operators do not really object to current recovery vehicle duty rates, they most certainly object very strongly to the proposed new rates.

Regarding Oil's campaign to raise HGV training standards. I am an owner of a small four-vehicle training company in the Isle of Man and to qualify to instruct you must have at least three years experience and be over the age of 21 (two years for LGV if you are an approved driving instructor).

The law was only changed two years ago, but it has had quite an impact on the reduction in deaths on our roads of young inexperienced newly qualified drivers.

Also it has stopped any person who has just passed their LGV test instructing in an LGV which is what you are after. As you are aware, the limit on the island is 3.5 tonnes unladen, above which you require an LGV licence. This has stopped some of the more dubious instructors from training.

My company trains about 49 truck and car drivers per week which is quite creditable for such a small island. The test is similar to the UK test, but the controlled stop which at present is done on the highway, is soon to be held at the test station on a newlyinstalled lane.

I hope the law in England will be changed, because it will give the whole industry a better image, Dave Harris Manx Large Goods Vehicle Training Services, Port St Mary, Isle of Man.