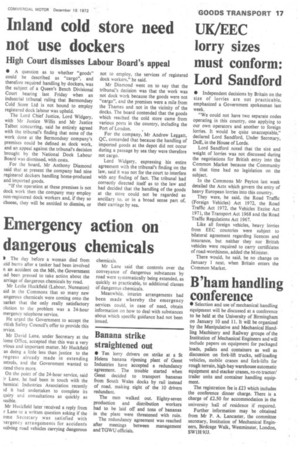 Page 19, 15th December 1972 — UK/EEC lorry sizes must conform: Lord Sandford
Close
Noticed an error?
If you've noticed an error in this article please click here to report it so we can fix it.
Keywords : Lorry, Wagons, Truck, Motoring Taxation In The United Kingdom, Politics

• Independent decisions by Britain on the size of lorries are not practicable, emphasized a Government spokesman last week.

"We could not have two separate codes operating in this country, one applying to our own operators and another to foreign lorries. It would be quite unacceptable," declared Lord Sandford, Under Secretary, DoE, in the House of Lords.

Lord Sandford noted that the size and weight of lorries was not discussed during the negotiations for British entry into the Common Market because the Community at that time had no legislation on the subject.

In the Commons Mr Peyton last week detailed the Acts which govern the entry of heavy European lorries into this country.

Like all foreign vehicles, heavy lorries from EEC countries were subject to bilateral agreement regarding licences and insurance, but neither they nor British vehicles were required to carry certificates of road-worthiness, added the Minister.

There would, he said, be no change on January 1 next, when Britain enters the Common Market.