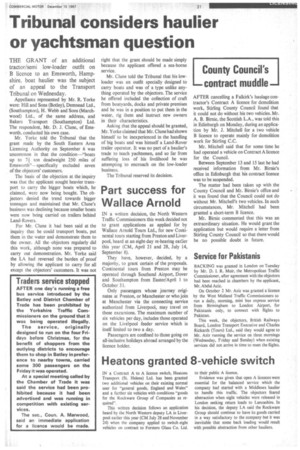 THE GRANT of an additional tractor/semi low-loader outfit on B licence to an Emsworth, Hampshire, boat haulier was the subject of an appeal to the Transport Tribunal on Wednesday.

Mr. Yorke told the Tribunal that the grant made by the South Eastern Area Licensing Authority on September 6 was uncommon in that the condition—"boats up to 71 ton deadweight 250 miles of Emsworth"-specifically excluded seven of the objectors' customers.

The basis of the objection at the inquiry was that the applicant sought heavier transport to carry the bigger boats which, he claimed, were now being bought. The objectors denied the trend towards bigger tonnages and maintained that Mr. Clune's business was declining because smaller boats were now being carried on trailers behind Land-Rovers.

For Mr. Chute it had been said at the inquiry that he could transport boats, put them in the water and demonstrate them to the owner. All the objectors regularly did this work, although none was prepared to carry out demonstration. Mr. Yorke said the LA had reversed the burden of proof by allowing the applicant to carry for all except the objectors' customers. It was not right that the grant should be made simply because the applicant offered a sea-borne service.

Mr. Clune told the Tribunal that his lowloader was an outfit specially designed to carry boats and was of a type unlike anything operated by the objectors. The service he offered included the collection of craft from boatyards, docks and private premises and he was in a position to put them in the water, rig them and instruct new owners in their characteristics.

Asking that the appeal should be granted, Mr. Yorke claimed that Mr. Chine had shown himself to be inexperienced in the handling of big boats and was himself a Land-Rover trailer operator. It was no part of a haulier's trade to teach yachtsmen, and so far from suffering loss of his livelihood he was attempting to encroach on the low-loader business.

The Tribunal reserved its decision.