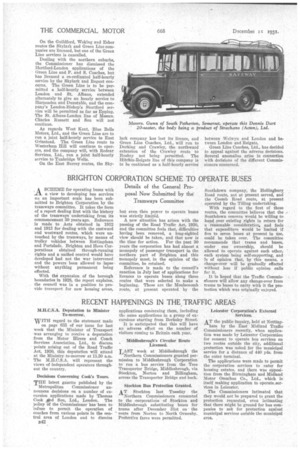 Page 60, 15th December 1931 — BRIGHTON CORPORATION SCHEME TO OPERATE BUSES
Close
Noticed an error?
If you've noticed an error in this article please click here to report it so we can fix it.

Details of the General Proposal Now Submitted by the Tramways Committee ASCHEME for operating buses with a view to developing bus services on an important scale has been submitted to Brighton Corporation by the tramways committee. It takes the form of a report dealing first with the history of the tramways undertaking from its commencement 30 years ago. Reference is ma.do to Acts obtained in 1912 and 1913 for dealing with the eastward and westward routes, which were untouched by the tramways, by means of trolley vehicles between Rottingdean and Portslade. Brighton and Hove Corporations obtained through-running rights and a unified control would have developed had not the war intervened and the powers been allowed to lapse without anything permanent being effected.

With the expansion of the borough boundaries in 1928, the report explains, the council was in a position to provide transport for new housing areas, but even then power to operate buses was strictly limited.

A new situation has arisen with the passing of the Road Traffic Act, 1930, and the committee feels that, difficulties having been removed, a long-sighted view should be taken, and that now is the time for action. For the past 30 years the corporation has had almost a monopoly of passenger transport in the northern part of Brighton and this monopoly must, in the opinion of the committee, be retained.

With regard to the first of these routes, the committee believes that the Southdown concern would be willing to hand over existing rights in return for a reasonable consideration, and feels that expenditure would be limited if five to seven buses at present in use, could be taken over. The committee recommends that trams and buses, under one ownership, should be allowed to operate against each other, each system being self-supporting, and Is of opinion that, by this means, a change-over will be gradually effected without loss if public opinion calls for it.

It is hoped that the Traffic Commissioners will allow any change-over from trams to buses to carry with it the protection which was originally enjoyed.