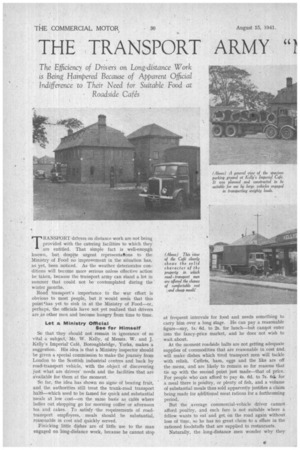 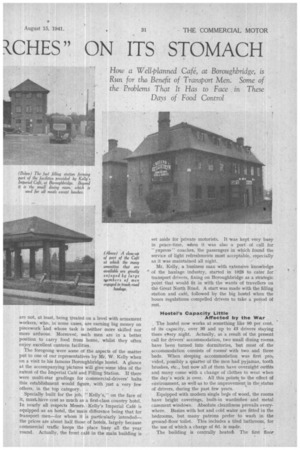 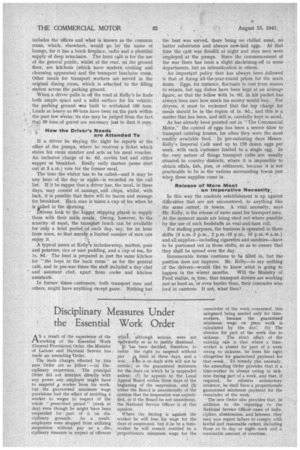 Page 28, 15th August 1941 — THE TRANSPORT ARMY "T
Close
Noticed an error?
If you've noticed an error in this article please click here to report it so we can fix it.
Keywords : Hospitality / Recreation

CHES " ON ITS STOMACH

TRANSPORT drivers on distance work are not being provided with the catering facilities to which they are entitled. That simple fact is well-enough known, but, clesptte urgent representations to the Ministry of Food no improvement in the situation has, as yet, been noticed. As the weather deteriorates conditions will become more ,serious unless effective action be taken, because the transport army can stand a lot in summer that could not be contemplated during the

Road transport's importance to the war effort is obvious to most people, but it would seem that this point has yet. to sink in at the Ministry of Food—or, perhaps, the officials have not yet realized that drivers are as other men and become hungry from time to time.

Let a Ministry Official See for Himself So that they should not remain in ignorance of so vital a subject, Mr. W. Kelly, of Messrs. W. and J. Kelly's Imperial Café, Boraughbridge, Yorks, makes a suggestion. His idea is that a Ministry inspector should be given a special commission to make the journey from London to the Scottish industrial centres and back by road-transport vehicle, with the .object of discovering just what are drivers' needs and the facilities that are available for them at the moment.

So far, the idea has shown no signs, of bearing fruit, and the, authorities still treat the trunk-road transport halt.—which used to be famed for quick and substantial Meals at low cost—on the same basis as cafes where ladies out shopping go for morning coffee or afternoon tea and cakes. To satisfy the requirements of roadtransport ernpfoYees, meals should he substantial, reasonable in cost and quickly served.

Finicking little dishes are of little use to the man engaged on long-distance work, because he cannot stop

at frequent intervals for food and needs something to carry him over a long stage. He can pay a reasonable figure—say, 6d. to 2s. for lunch—but campt enter into the fancy-price market, and he does not wish to wait. about.

At the moment roadside halts are not getting adequate supplies of commodities that are reasonable in cost and. will make dishes which tired -transport men will tackle with relish. Cutlets, ham, eggs and the like are off the menu, -and are likely to remain so for reasons that tie up with the second point just made—that of price_ For people who can afford to pay 4s. 6d. to 7s. 64 for a meal there is poUltry, or plenty of fish, and a volume of substantial meals thus sold apparently justifies a claim being made for a,dditional meat rations for a forthcoming period. But the average commercial-vehicle driver cannot afford poultry, and such fare is not suitable where a fellow wants to eat" and get on the road again without loss of time, so he has no great claim to a slfare in the rationed foodstuffs that are supplied to restaurants.

Naturally, the long-distance men wonder why they are not, at least, being treated on a level with armament workers, who, in some cases, are earning big money on piecework 'and whose task is neither more skilled nor more arduous. Moreover, such men are in a better, position to carry food from home, whilst they often enjoy excellent canteen facilities.

The foregoing were some of the aspects of the matter put to one of our representatives by Mr, W. Kelly when an a visit to his famous Boroughbridge hostel. A glance at the accompanying pictures will givesome idea of the . extent of the Imperial Café and Filling Station. If there were multi-star gradings for commercial-drivers' halts this establishment would figure, with just a very few others, in the top category. .

Specially built for the job, "Kelly's," on the face of it, must.have cost as much as a first-class country hotel. In nearly all respects Messrs. -Kelly's Imperial Café is equipped as an hotel, the main difference being that for transport men—for whom it is particularly intended— the prices are about half those of hotels, largely because commercial traffic keeps the place busy all the year round. Actually, the front café in the main building is set aside for private motorists. It was kept very busy in peace-time, when it was also a port of call for " express " coaches, The passengers in which found the service Of light refreshments most acceptable, especially as it was maintained all night.

" of the haulage industry, started in 1928 to cater for transport drivers, fixing on Boroughbridge as a strategic point that would fit in with the wants of travellers on the Great North Road. A start was made with the filling station and café, followed by the big hostel when the hours regulations compelled drivers to take a period of rest.

The hostel now works at something like 90 per cent. of its capacity, over 30 and up to 43 drivers staying there eirery night. Actually, as -a result of the present call for drivers' accommodation, two small dining rooms, have been turned into dormitories, but most of the accommodation consists of rooms with two and three beds. When sleeping accommodation wasfirst prol vided, possibly a quarter of the men had pyjamas, tooth brushes, etc., but now all of them have overnight outfits and many come with a change of clothes to wear when the day's wprk is over. All this points to the effect of environment, as well as to the improvement in the status of drivers, during the past few years.

Equipped with modern single bef,ls of wood, the rooms have bright coverings, built-in wardrobes and metal casement windows. Absolute cleanliness prevails everywhere. Basins with hot and cold water are fitted in the bedrooms, but many patrons prefer to wash in the ground-floor toilet. This includes a tiled bathroom, for the use of which a charge of 6d. is made.

The building is centrally heated. The first floor includes the offices and what is known as the common room, which, elsewhere, would go bY the name of lounge, for it has a brick fireplace, radio and a plentiful supply of deep armchairs. The front cafe is for the use of the general public, whilst at the rear, on the ground floor, are kitchens (which have modern cooking and cleansing apparatus) and the transport luncheon room. Other meals for transport workers are served in the original dining room, which is attached to the filling station across the parking ground.

When a driver pulls in off the road at Kelly's he finds both ample space and a solid surface for his vehicle; the parking ground was built to withstand 100 tons. Loads as heavy as 80 tons have been on. the park within the past few Weeks; its size may be judged from the fact that 30 tons of gravel are necessary just to dust it ov,er.

How the Driver's Needs are Attended To

If a driver be staying the night he reports at the office at the pumps, where he receives a ticket which states his room number and acts as his meal voucher. An inclusive charge of 4s. ficl. covers bed and either supper or breakfast. Really early starters (some start out at 3 a.m.) vote for the former meal.

The time the visitor has to be called—and it may be any hour of the day or night—is recorded on the call list. If it be supper that a driver has, the meal, in these days, may consist of sausage and chips, whilst, with luck, it is possible that there will be bacon and sausage for breakfast. Eech man is taken a cup of tea when he is

T)rivers look to the bigger stopping places to supply them with their main meals. Owing, however, to the scarcity of meat, the transport lunch can be available for only a brief period • of each day, say, for an hour from noon, so that merely limited number of men can enjoy it. A typical .menu at Kellyes includes soup, mutton, peas and potatoes, rice or suet pudding, and a cup of tea, for 1s. 9d. The food is prepared in just the same -kitchen for "the boys in the hack room" as for the general cafe, and in pre-war. times the staff included a day chef and assistant chef, apart from cooks and kitchen assistants..

In former times customers, both transport men and others, might have anything except game. Nothing but

the best was served, there being no chilled meat, no butter substitutes and always new-laid eggs. At that time the clefe was floodlit at night arid nine men were employed at the pumps. Since the commencement of the war there has been a slight slackening-off in some departments, but an intensification in others.

An important policy that has always been followed is that of fixing all-the-year-round prices for the main items. Eggs, for instance, fluctuate in cost from season to season, but egg dishes have been kept at an average figure.; so that the fellow With Is. 6d. in his pocket has always been sure how much his money would buy. , For drivers, it must be reckoned that the top charge for meals should be in-the region of is. 9d., and this is a matter that has been, and still is, carefully kept in mind_ As has already been pointed out in" The Commercial Motor," the control of eggs has been a severe blow to transport catering houses, for often they were the .most readily available food. ' In pre-rationing days Messrs. Kelly's Imperial Cafe used up to 170 dozen eggs per week, with each customer limited to a single egg. In the . very nature o things transport cafes are usuallysituated in country districts, where it is impossible to obtain offals, fish, pies, or oddments, because it is not practicable to be in the various surrounding towns just when these supplies come in.

In this way the roadside establishment is up against difficulties that are not encountered, to anything like the same extent, In towns. A vital necessity, says Mr. Kelly, is the release of more meat for transport men. At the moment meals are being eked out where possible, by the use of such foodstuffs as veal-and-ham roll.

For staffing purposes, the business is operated in three shifts (6 a.m.-2 p.m., 2 p.m.-10 p.m., 10 p.m.-6 a,m.) and, all supplies—including cigarettes and sundries—have to be portioned out in those shifts, so as to ensure that they shall be spread over the day.

Innumerable forms "continue to be filled in, but the position does not improve. Mr. Kelly—to say nothing of the drivers—would like to know what is going to happen in the winter months. Will the Ministry of Food realize, in time, that transport drivers are working just as hard as, or even harder than, their comrades who feed in canteens If not, what then?