Why Has Steam Been Penalized? 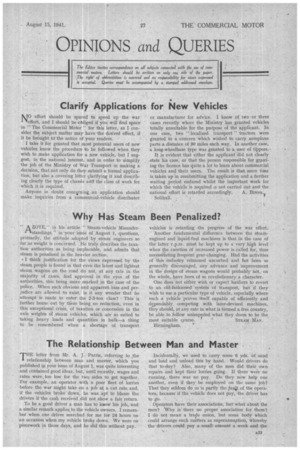 Page 25, 15th August 1941 — Why Has Steam Been Penalized?
Close
Noticed an error?
If you've noticed an error in this article please click here to report it so we can fix it.

AZOTE," in his 'article " Steam-vehicle Misunderstandings," in your issue of August I, questions, primarily, the attitude adopted by steam engineers so far as weight is conc'erned. He truly describes the taxation authorities as being implacable, and admits that steam is penalized in the heavier section.

• I think justification for. the views expressed by the steam people is found in that even the latest and lightest steam wagons on the road do not, at any rate in the majority of cases, find approval in the eyes of the authorities, this being more marked in the case of the police. When such obvious and apparent bias and prejudice are allowed to exist, is it any wonder that no attempt is made to enter the 2-3-ton class? • This is further borne out by there being no reduction, even in this exceptional crisis, of taxation or concession in the axle weights of steam vehicles, which are so suited to taking heavy • loads and quantities in bulk—a thing to be remembered when a shortage of transport vehicles is retarding the progress of the war effort.

• Another fundamental difference between the steamengined and liquid-fuel machines is that in the case of the latter r.p.m. must be kept up to a very high level when t,ie exertion of increased power is called for, thus necessitating frequent gear-changing. Had the activities of this industry remained uncurbed and hot been so generally discouraged, any advance and improvement in the design of steam wagons would probably not, on the whole, have been of so revolutionary a character.

One does not either wish or expect hauliers to revert to an old-fashioned system of transport, but if they wish to use a particular type of vehicle, especially where such a yehicle proves itself capable of efficiently and dependably competing with later-devised machines, they should, at any rate in what is -termed a free country, be able.to follow unimpeded what they deem to be the most suitable course. STEAM MAN. Birmingham.