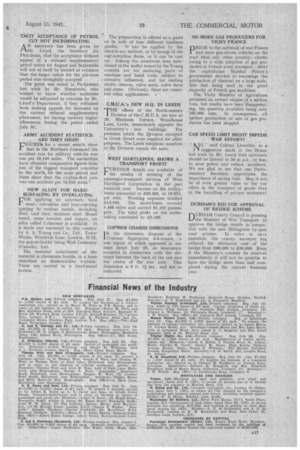 Page 19, 15th August 1941 — TACIT ACCEPTANCE OF PETROL CUT NOT INCRIMINATING
Close
Noticed an error?
If you've noticed an error in this article please click here to report it so we can fix it.
Keywords : Commer, Rootes, Rationing, Tram, Hartlepool, Gasoline, Tata Indica

AN assurance has been given by Mr. Lloyd, the Secretary for Petroleum, that the acceptance without appeal of a reduced supplementary petrol ration for August and Septembier will not of itself be treated as evidence that the larger ration for the previous period was wrongfully accepted.

The point was raised in Parliament last week by Mr. Simmonds, who wished to know whether motorists would be subjected to criticism by Mr. Lloyd's Department, if they refrained from making appeals for increases on the current reduced supplementary allowances, for having received higher 'allowances during the period ended July 31.

ARMY ACCIDENT STATISTICS: ARE THEY HIGH?

FIGURES for a recent month show that in the Northern Command the accident rate for military vehicles was one per 19,108 miles. The authorities have obtained comparative figures from one of the biggest transport concerns in the north_ for the same period and these show that the civilian-fleet rate was one accident per 1:3,020 miles.‘

FOR applying an extremely hard wear-, corrosionand heat-resisting cpating to various metals, including fteel, cast iron, stainless steel, Monel metal, some bronzes and copper, an alloy called Colmonoy is available. It is made and marketed in this country by A. S. Young and Co., Ltd., Tower Works, Woodside Lane, London, N.12, the patent-holder being Wall Colmonoy .(Canada), Ltd.

The essential constituent of the material is chromium boride, in a form described as diamond-like crystals. These are carried in a hard-metal matrix. The preparation is offered as a paste or in rods of four different hardness grades. It 'can be applied by the electric-arc method, or by means of the ozy-acetylene flame, or it can be cast on. Among the numerous uses mentioned in the leaflet issued by the Young concern are for surfacing parts of machine and hand tools, subject to abrasive influences, and for coating shafts, sleeves, valve seats, valve faces and cams. Obviously, there are countless other applications.

THE offices of the North-eastern Division of the C.M.U.A. are now at 29, Blenheim Terrace, Woodhouse Lane, Leeds, immediately opposite the

University's new buildings. The premises which the 14ivision occupied in Gieek Street were required for other purposes. The Leeds telephone numbers of the Division remain the same.

the results of working of the passenger-transport services of West Hartlepool Corporation in the past financial year. Income on the trolleybuses amounted to £20,585, or 19.57d. per mile. Working expenses totalled tI4;350. The motorbuses covered 5.488 miles and carried 91,192 passengers. The total profit on the undertaking amounted to £5,180.

COMMER CHASSIS DIMENSIONS I N the dimension diagram of the Commer Superpoise 4-5-tonner, a test report of which appeared in our issue dated July 25, an inaccuracy occurred in connection with the distance between the back of the cab and the centre of the rear axle. This dimension is 9 ft. 1 ins., and not as indicated. NO MORE GAS PRODUCERS FOR VICHY FRANCE

PRIOR to the outbreak of war France had more gas-driven vehicles on the road than any other country, chiefly owing to a: wide adoption of gas productrs in French army transport. After the capitulation Marshal Petain's government decided to encourage the production of charcoal on a large scale, this fuel being used in the great

The • Vichy Ministry of Agriculture promised an annual output of a million tons, but results have been disappointing, the quantity available being only 250,000 tons. In consequence, all ftyrther production or sale of gas producers has been stopped.

"MO," said Colonel Llewellin, to a 1 1 suggestion made in the House last week by Mr. Leach that motorists should be limited to 30 m.p.h., or less, to save petrol and reduce accidents. We are glad to see that our Parliamentary Secretary appreciates the importance of saving time. May it not be of even greater value tothe war effort in the transport of goods than in the travelling of private motorists?

DURHAM'S BID FOR APPROVAL OF BRIDGE SCHEME DURHAM County Council is pressing the Minister of War Transport to approve the bridge details in connection with the new Billingham by-pass road scheme. In order to save materials, the county surveyor has reduced the estimated cost of the bridge from £80,000 to £30,000. Even if the Ministry's consent be received immediately it will not be. possible to have the bridge more than half, completed during the current financial year.