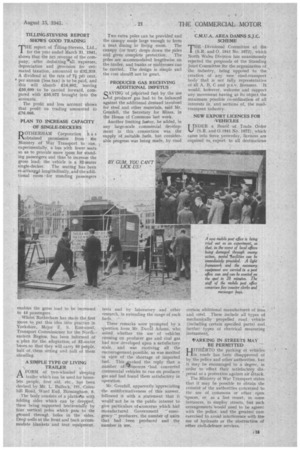 Page 17, 15th August 1941 — TILLING-STEVENS REPORT SHOWS GOOD TRADING •
Close
Noticed an error?
If you've noticed an error in this article please click here to report it so we can fix it.
Keywords :

THE report of lilling-Stevens, Ltd., for the year ended March 31, 1941, shows that the net revenue of the company, :after deductineall expenses, depreciation and provision for estimated taxation, amounted to £32,319. A dividend at the rate or 7i peer cent.

The profit and loss account shows that profit on trading amounted to £76,066.

PLAN TO INCREASE CAPACITY OF SINGLE-DECKERS

ROTHERHAM Corporation h a s obtained permission from • gle Ministry of War Transport to run. I experimentally, a bus with fewer seats so as to provide more room for standing passengers and thus to increase the gross load; the vehicle is a 32-seater

single-decker. The seating has been re-arrangv.1 longitudinally, and the additional room for standing passengers enables the gross load to he increased to 44 passengers.

• Whilst Rotherham has Made the first move to put this idea into Practice in Yorkshire, Major F. S. Eastwood; Transport Commissioner for the North-• eastern Region, has been informed of a plan for the adaptation of 32-seater buses-so that they will carry 50 people, half of .them sitting and half of them standing.

A SIMPLE TYPE OF LIVING TRAILER •

AFORM of two-Wheeled sleeping hailer which Can be used for homeless people, first aid, etc., has been devised by Mr. 1.. Bullock; 191, Coleshill Road, Ward End, Birmingham, 8.

The body consists of a platfotrn ukitti folding sides which can be dropped, these tieing supported horizontally by four vertical poles which pass to the ground through holes in the sides. Deep wells at the front and back accommodate blankets and tent equipment.

a neat dining br living room. The canopy (or tent) drops down the ;sides and gives complete protection. The poles are accommodated lengthwise on the trailer, and bunks or mattresses can be carried. The design is simple and the cost should not be great.

SAVING of infported fuel by the use of producer gas had to be balanced against the additional demand involved for steel and other materials, said Mr. C;renfell, the Secretary for Mines, in the House of Commons last week.

Another limiting faotor, he added, in any large-scale commercial development in this connection was the -supply of ,suitable fuels, but considerable progress was being made, by road tests and by laboratory and other research, in extending the range of such fuels, '

These remarks were prompted by a question from, Mr. Dayrd Adams", who asked whether the use of vehicles running on producer gas and coal gas had now developed upon a satisfactory scale, and was receiving all the encouragement. possible, as was merited in vie* of the shortage of imported fuel. This ,s,...,oked the reply that a• number ofMtoncerns had converted commercial vehicles to run on producer gas and had found them satisfactory in operation.

:41r. Grenfell, apparently appreciating the uninformativeness of this answer, followed it with a statement that it would-not be in the public interest to -give particulars of sconcerns_which had manufactured Government " emergency " producers, the number of units that had been produced and the number in use, C.M.U.A. AREA DAMNS S.J.C. SCHEME THE • Divisional Committee of the (SR. and 0. 1941 No. 1072), which North Wales Division has unanimously rejected the proposals of the Standing Joint Committee for the organization of the industry, being opposed to the creation of any new road-transport body ' that is not fully representative of all A, B, C and p.s.v. licensees. It would, lio,lvever, welcome and support any movement having as its object the maximum possible co-ordination of all interests in, and sections' of, the roadtransport industry.

UNDER a Board of Trade Order (S.R. and 0.1941 No. 1072), which came into force .yesterday, licences are required tfzi export to all destinations

certain additional manufactured of iron and steel. These include all types of mechanically propelled road vehicle (including certain specified parts) and . further types of electrical measuring instrument.

VARKING IN STREETS MAY BE PERMITTED

HITHERTO the parking of vehicles in roads has been disapproved of by the police and other authorities, hut it may be encouraged to a degree, in order to effect their satisfactory dispersal as a protection against air attack.

The Ministry of War Transport states that it may be possible to obtain the consent of the authorities concerned to the use of commons or other open 'spaces, or. as a last resort, in some instances, to employ streets, but such arrangements would need to be agreed with the police, and the greatest care exercised to avoid-interference with the use of hydrants or the obstruction of other civil-defence services.