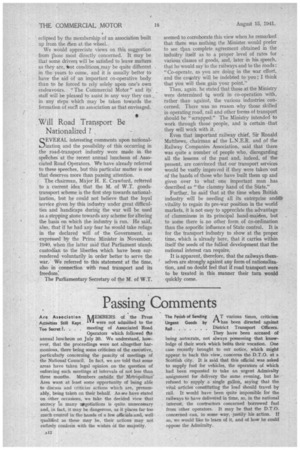 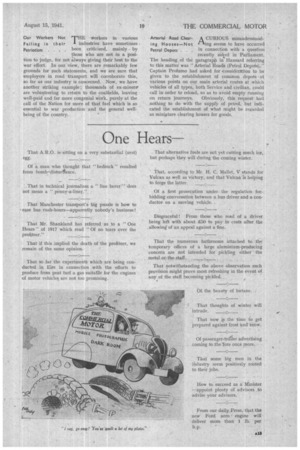 Page 14, 15th August 1941 — Passing Comments
Close
Noticed an error?
If you've noticed an error in this article please click here to report it so we can fix it.
Keywords :

Are Association AEMBERS of the Press

Activities Still Kept IYI were not admitted to the Too Secret .• . . meeting of Associated Road Operators which followed ihe annual luncheon on July 30. We understand, however, that the proceedings were not altogether harmonious, there being some criticism of the executive, particularly concerning the paucity of meetings of the National Council. In fact, we are told that some areas have taken legal opinion on the question of enforcing such meetings at intervals of not less than three months. Members outside the MetropolitanArea want at least some opportunity of being able to discuss and criticize actions which are, presumably, being taken on their behalf. As .we have stated on other occasions, we take the decided view that secrecy in many rogotiations is quite. unnecessary and, in fact, it may be dangerous, as it places far too much control in the hands of a few officials and, well qualified as these may be, their actions may not entirely conform with the wishes Of the majority. The Fetish of Sending A T various times, criticism Urgent Goods by r-k has been directed against

They have been accused of being autocrats, not always possessing that knowledge of their work which befits their vocation. One case recently brought to our notice, which might appear. to back this view, concerns the D.T.O. at a Scottish city. It is said that this official was asked to supply fuel for vehicles, the operators of which had been requested to take an Urgent Admiralty assignment for delivery the same evening, but he refused to supply a single. gallon, saying that the vital articles constituting the load should travel by rail. It would have been quite impossible for the railways to have delivered in time, so, in the national interest, the contractors concerned borrowed fuel from other operators. It may be that the D.T.0,. concerned can, in some way, -justify his action. If so, we would like to learn of it, and of how lie could oppose the Admiralty.

Our Workers Not THE workers in various

Failing in their industries have sometimes Patriotism . . . been criticized, mainly by those who are not in a 'position to judge, for not always giving their best to the war effort. In our view, there are remarkably few grounds for such statements, and we' are sure that employers in road transport will corroborate this, so far as our industry is concerned. Now, we have another striking example; thousands of ex-miners are volunteering to return to the coalfields, leaving well-paid and far more congenial Work, purely at the call of the Nation for more of that fuel which is so essential to war production and the general wellbeing of the country. Arterial Road ClearA CURIOUS misunderstanding Houses—Not r-king seems to have occurred Petrol Depots . . . in connection with a question recently asked in Parliament. The heading, of the paragrap,h in Hansard referring to this matter was "Arterial Roads (Petrol Depots)." Captain Profumo had asked for ,consideration to be given to the establishment of common depots at various points on our main arterial routes at which vehicles of all types, both Service and civilian, could call in order to reload, so as to avoid empty running

on return journeys. Obviously, this request had nothing to do with the supply of petrol, hut indicated the establishment of what might be regarded as miniature clearing houses for goods.