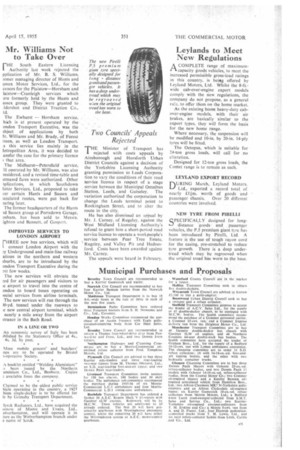 THE Minister of Transport has rejected with costs appeals by Aireborough and Horsforth Urban District Councils against a decision of the Yorkshire Licensing Authority granting permission to Leeds Corporation to vary the conditions of their road service licence in respect of a stage service between the Municipal Omnibus Station, Leeds, and Ciuiseley. The variation authorized the corporation to change the Leeds terminal point to Rockingham Street, and to alter the route in the city.

He has also dismissed an mina' by Mr. J. Carney, of Rugeley, against the West Midland Licensing Authority's refusal to grant hint a short-period road service licence to operate a work people's service between Pear Tree Estate. ■

Rugeley, and Valley Pit and Hednes

ford. Costs have been awarded against Mr. Carney.

The appeals were heard in February.