"Bus Batteries Are Too Small" 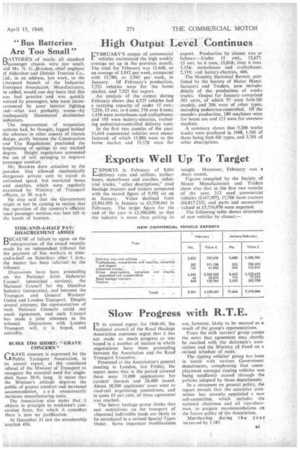 Page 9, 15th April 1949 — "Bus Batteries Are Too Small"
Close
Noticed an error?
If you've noticed an error in this article please click here to report it so we can fix it.
Keywords : Bus, Transport

Aldershot and District Traction Co., Lid., in an address, last week, to the Liverpool branch of the Industrial Transport Association. Manufacturers, he added, would.one day learn that this was bad practice and was quickly aoticed by passengers, who were inconvenienced by poor interior lighting ind-what was probably worse-by inadequately illuminated destination indicators.

The improvement of suspension systems had, he thought, lagged behind the advance in other aspects of chassis design, partly because the Construction and Use Regulations precluded the lengthening of springs to any marked degree. Height regulations prevented the use of soft springing to improve passenger comfort.

Mr. Brookes drew attention to the paradox that allowed mechanicalljr dangerous private cars to travel at unlimited speed, but restricted buses and coaches, which were regularly examined by Ministry of Transport officers, to 30 m.p.h.

He also said that the Government might at last be coming to realize that the operation of the country's efficient road passenger services was best left in the hands of busmen.

BECAUSE of failure to agree on the interpretation of thern award recently made by an independent tribunal for the payment of bus workers at timeand-a-half on Saturdays aftcr 1 p.m., the matter has been referred to the tribunal.

Discussions have been proceeding on the National Joint Industrial Council (municipal services), the National Council for the Omnibus Industry (companies), and between the Transport and General Workers' Union and London Transport. Despite several attempts, the representatives of both National Councils could not reach iiireement, and each Council has made a joint reference to the tribunal. Discussions with London Transport will, it is hoped, end amicably.

GRAVE concern is expressed by the Public Transport Association, in its annual report, at the continued refusal of the Minister of Transport to recognize the essential need for singledeck buses 30-ft. long. It states that the Minister's attitude deprives the public of greater comfort and increased accommodation, a n d unnecessarily increases manufacturing costs.

The Association also states that _ it objects in principle to workmen's concession fares, for which it considers there is now no justification.

At December 31 last the membership totalled 454.