Lightweights fit all forms of work 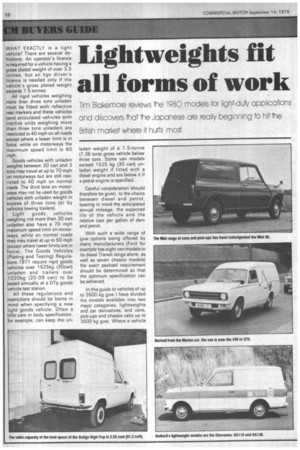 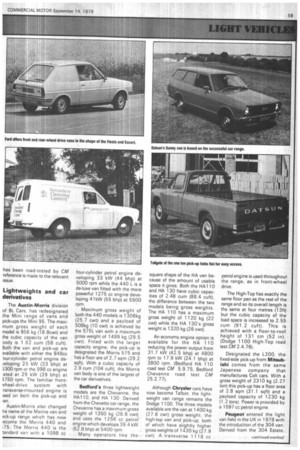 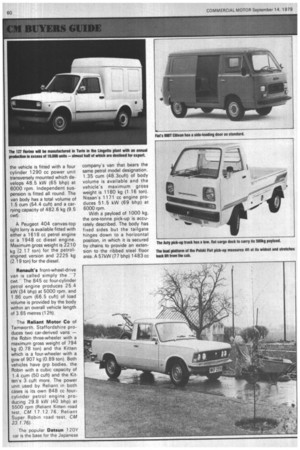 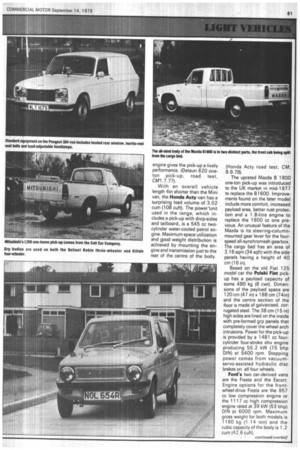 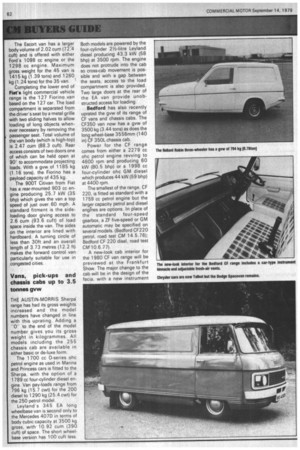 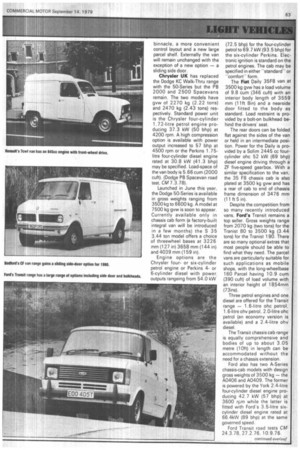 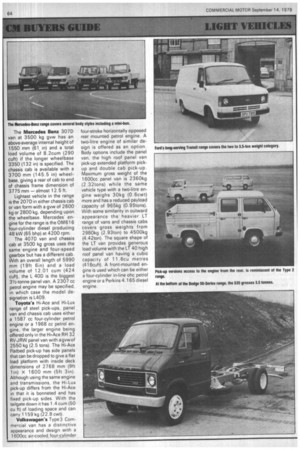 Tim Blakemore reviews the 1980 models for light-du-y applications and discovers --'-)at the Japanese are really beginning to hit the British market where it hurts most.

Light goods vehicles weighing not more than 30 cwt unladen also have a 70 mph maximum speed limit on motorways, while on normal roads they may travel at up to 50 mph (except where lower limits are in force). The Goods Vehicles (Plating and Testing) Regulations 1971 require rigid goods vehicles over 1525kg (30cwt) unladen and trailers over 1020kg (20.09 cwt) to be tested annually at a DTp goods vehicle test station.

All these regulations and restrictions should be borne in mind when specifying a new light goods vehicle. Often a little care in body specification, for example, can keep the un

laden weight of a 7.5-tonne (7.38 tons) gross vehicle below three tons. Some van models exceed 1525 kg (30 cwt) unladen weight if fitted with a diesel engine and are below it if a petrol engine is specified.

Careful consideration should therefore be given, to the choice between diesel and petrol, bearing in mind the anticipated annual mileage, the expected life of the vehicle and the relative cost per gallon of dery and petrol.

With such a wide range of gvw options being offered by many manufacturers (Ford for example has eight van models in its diesel Transit range alone, as well as seven chassis models) the exact payload requirement should be determined so that the optimum specification can be achieved.

In this guide to vehicles of up to 3500 kg gvw I have divided the models available into two major categories; lightweights and car derivatives; and vans, pick-ups and chassis cabs up to 3500 kg gvw. Where a vehicle

vheel-drive system with ransverse-mounted engine is ised on both the pick-up and ,an.

Austin-Morris also changed he name of the Marina van and lick-up range which has now ,ecome the Morris 440 and p75. The Morris 440 is the tandard van with a 1098 cc

Although Chrysler cars have now become Talbot, the lightweight van range remains the Dodge 1100. The three models available are the van at 1400 kg (27.6 cwt) gross weight, the high-top van and pick-up, both of which have slightly higher gross weights of 1420 kg (27.9 cwt). A transverse 1 1 1 8 cc petrol engine is used throughout the range, as in front-wheel drive.

With a payload of 1000 kg, the one-tonne pick-up is accurately described. The body has fixed sides but the tailgate hinges down to a horizontal position, in which it is secured by chains to provide an extension to the ribbed steel floor area. A 57kW (77 bhp) 1483 cc engine gives the pick-up a lively performance. (Datsun 620 oneton pick-up, road test, CM1.7.77).

The uprated Mazda B 1800 one-ton pick-up was introduced to the UK market in mid-1977 to replace the B1600. Improvements found on the later model include more comfort, increased payload area, better rust protection and a 1.8-litre engine to replace the 1600 cc one previous. An unusual feature of the Mazda is its steering-columnmounted gear lever for the fourspeed all-synchromesh gearbox. The cargo bed has an area of 3.16 sqm (34 sqft) with the side panels having a height of 40 cm (16 in).

Based on the old Fiat 125 model car the Polski Fiat pickup has a payload capacity of some 480 kg (8 cwt). Dimensions of the payload space are 120 cm (47 in) x 188 cm (74in) and the centre section of the floor is made of galvanised, corrugated steel. The 38 cm (15 in) high sides are lined on the inside with pre-formed grp panels that completely cover the wheel arch intrusions. Power for the pick-up is provided by a 1481 cc fourcylinder four-stroke ohv engine producing 55.2 kW (75 bhp DIN) at 5400 rpm. Stopping power comes from vacuumservo-assisted hydraulic disc brakes on all four wheels.

Vans, pick-ups and chassis cabs up to 3.5 tonnes gvw

THE AUSTIN-MORRIS Sherpa range has had its gross weights increased and the model numbers have changed in line with this uprating. Adding a

-0to the end of the model number gives you its gross weight in kilogrammes. All models including the 255 chassis cab are available in either basic or de-luxe form.

Both models are powered by the four-cylinder 21/2-litre Leyland diesel producing 43.3 kW (58 bhp) at 3500 rpm. The engine does not protrude into the cab so cross-cab movement is possible and with a gap between the seats, access to the load compartment is also provided. Two large doors at the rear of the EA van provide unobstructed access for loading.

The smallest of the range, CF 220, is fitted as standard with a 1759 cc petrol engine but the larger capacity petrol and diesel engines are options. In place of the standard four-speed gearbox, a ZF five-speed or GM automatic may be specified on several models. (Bedford CF220 petrol, road test CM 14.5.76): Bedford CF 220 disel, road test CM 10.6.77).

A new-look cab interior for the 1980 CF van range will be previewed at the Frankfurt Show. The major change to the cab will be in the design of the facia, with a new instrument binnacle, a more convenient control layout and a new large parcel shelf. Externally the van will remain unchanged with the exception of a new option — a sliding side door.

Engine options are the Chrysler fouror six-cylinder petrol engine or Perkins 4or 6-cylinder diesel with power. outputs rangeing from 54.0 kW

(72.5 bhp) for the four-cylinder petrol to 69.7 kW (93.5 bhp) for the six-cylinder Perkins. Electronic ignition is standard on the petrol engines. The cab may be specified in either "standard" or -comfort" form.

The rear doors can be folded flat against the sides of the van or held in an intermediate position. Power for the Daily is provided by a Sofim 2445 cc fourcylinder ohc 52 kW (69 bhp) diesel engine driving through a ZF five-speed gearbox. With a similar specification to the van, the 35 F8 chassis cab is also plated at 3500 kg gvw and has a rear of cab to end of chassis frame dimension of 3476 mm (11 ft 5 in).

Despite the competition from

so many recently introduced vans, Ford's Transit remains a top seller. Gross weights range from 2070 kg (two tons) for the Tranist 80 to 3500 kg (3.44 tons) for the Tranist 190. There are so many optional extras that most people should be able to find what they need. The parcel vans are particularly suitable for such applications as mobile shops, with the long-wheelbase

The Transit chassis cab range is equally comprehensive and bodies of up to about 3.05 metre (10ft) in length can be accommodated without the need for a chassis extension.

Toyota's Hi-Ace and Hi-Lux range of steel pick-ups, panel van and chassis cab uses either a 1 587 cc four-cylinder petrol engine or a 1968 cc petrol engine, the larger engine being offered only in the Hi-Ace RH 32 RV-JRW panel van with a gvwof 2550 kg (2.5 tons). The Hi-Ace Flatbed pick-up has side panels that can be dropped to give a flat load platform with inside deck dimensions of 2768 mm (9ft 1in) x 1600 mm (5ft 3in). Although using the same engine and transmissions, the Hi-Lux pick-up differs from the Hi-Ace in that it is bonneted and has fixed pick-up sides. With the tailgate down it has 1.4 cum (50 cu ft) of loading space and can carry 11 59 kg (22.8 cwt).

Volkswagen's Type 3 Commercial van has a distinctive appearance and design with a 1600cc air-cooled four-cylinder four-stroke horizontally opposed rear mounted petrol engine. A two-litre engine of similar design is offered as an option. Body options include the panel van, the high roof panel van pick-up extended platform pickup and double cab pick-up. Maximum gross weight of the 1600cc panel van is 2360kg (2.32tons) while the same vehicle type with a two-litre engine weighs 30kg (0. 6cwt) more and has a reduced payload capacity of 965kg (0.95tons). With some similarity in outward appearance the heavier LT range of vans and chassis cabs covers gross weights from 2980kg (2.93ton) to 4500kg (4.42ton). The square shape of the LT van provides generous load volume with the LT 40 high roof panel van having a cubic capacity of 11.6cu metres (416cuft). A front-mounted engine is used which can be either a four-cylinder in-line ohc petrol engine or a Perkins 4.165 diesel engine.