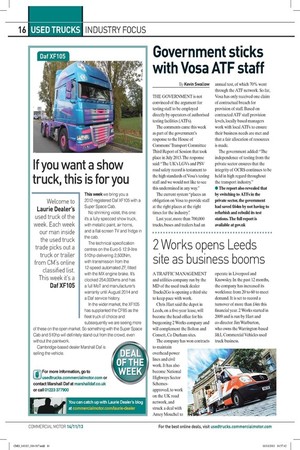 Page 12, 14th November 2013 — Government sticks with Vosa ATF staff
Close
Noticed an error?
If you've noticed an error in this article please click here to report it so we can fix it.

THE GOVERNMENT is not convinced of the argument for testing staff to be employed directly by operators of authorised testing facilities (ATFs).

The comments came this week as part of the government's response to the House of Commons' Transport Committee Third Report of Session that took place in July 2013. The response said: "The UK's LGVs and PSV road safety record is testament to the high standards of Vosa's testing staff and we would not like to see this undermined in any way." The current system "places an obligation on Vosa to provide staff at the right places at the right times for the industry': Last year, more than 700,000 trucks, buses and trailers had an

annual test, of which 70% went through the ATF network. So far, Vosa has only received one claim of contractual breach for provision of staff. Based on contracted ATF staff provision levels, locally based managers work with local ATFs to ensure their business needs are met and that a fair allocation of resources is made.

The government added: "The independence of testing from the private sector ensures that the integrity of OCRS continues to be held in high regard throughout the transport industry." • The report also revealed that by switching to ATFs in the private sector, the government had saved £64m by not having to refurbish and rebuild its test stations. The full report is available at gov.uk