T o the manufacturer they are the "Bedford Self-Propelled Pumps"; to 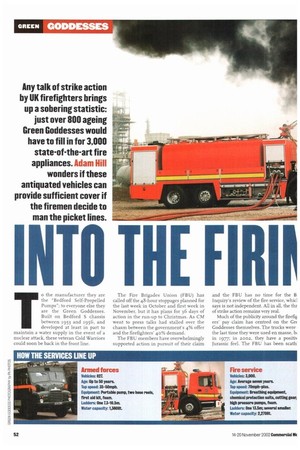 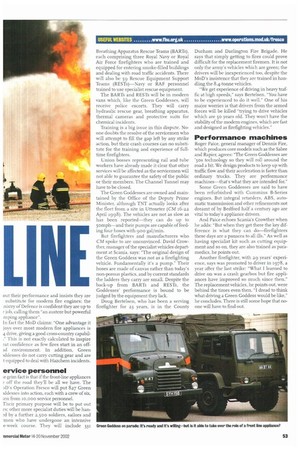 everyone else they are the Green Goddesses. Built on Bedford S chassis between 1953 and 1956, and developed at least in part to maintain a water supply in the event of a nuclear attack, these veteran Cold Warriors could soon be back in the front line. The Fire Brigades Union {FRU) has called off the 48-hour stoppages planned for the last week in October and first week in November. but it has plans for 36 days of action in the run-up to Christmas. As CM went to press talks had stalled over the chasm between the government's 4% offer and the firefighters 40% demand.

and the FBU has no time for the B Inquiry's review of the fire service, whicl says is not independent. All in all, the tlu of strike action remains very real.

Much of the publicity around the firefig ers' pay claim has centred on the Grt Goddesses themselves. The trucks were the last time they were used en masse, b. in 1977; in 2002, they have a positiv Jurassic feel. The FBU has been scath out their performance and insists they are substitute for modern fire engines; the nistry of Defence is confident they are up to t job, calling them "an austere but powerful nriping appliance".

In fact the MoD claims: "One advantage it joys over most modern fire appliances is 4 drive, giving a good cross-county capabil." This is not exactly calculated to inspire .=!,at confidence as few fires start in an offid environment. In addition, Green xIdesses do not carry cutting gear and are t equipped to deal with Hazchem incidents.

Le grim fact is that if the front-line appliances off the road they'll be all we have. The )D's Operation Fresco will put 827 Green iddesses into action, each with a crew of six, ten from 10,000 service personnel.

Their primary purpose will be to put out es; other more specialist duties will be hanKt by a further 2,500 soldiers, sailors and .men who have undergone an intensive e-week course. They will include 331

Breathing Apparatus Rescue Teams (BARTs), each comprising three Royal Navy or Royal Air Force firefighters who are trained and equipped for entering smoke-filled buildings and dealing with road traffic accidents. There will also be 59 Rescue Equipment Support Teams (RE STs)—Navy or RAF personnel trained to use specialist rescue equipment.

The BARTs and RESTs will be in modern vans which, like the Green Goddesses, will receive police escorts. They will carry hydraulic rescue gear. breathing apparatus, thermal cameras and protective suits for chemical incidents.

Training is a big issue in this dispute. Noone doubts the resolve of the servicemen who will attempt to fill the gap left by any strike action, but their crash courses can no substitute for the training and experience of fulltime firefighters.

Union bosses representing rail and tube workers have already made it clear that other services will be affected as the servicemen will not able to guarantee the safety of the public or their members. The Channel Tunnel may have to be closed.

The Green Goddesses are owned and maintained by the Office of the Deputy Prime Minister, although TNT actually looks after the fleet from a site in Uttoxeter (CM 16-22 April 1998). The vehicles are not as slow as has been reported—they can do up to 5omph—and their pumps are capable of feeding four hoses with 900 gal/min.

But firefighters and manufacturers who CM spoke to are unconvinced. David Crowther, manager of the specialist vehicles department at Scania, says: "The original design of the Green Goddess was not as a firefighting vehicle. Fundamentally it's a pump." Their hoses are made of canvas rather than today's non-porous plastics, and by current standards the ladders they carry are small. Despite the back-up from BARTs and RE STs, the Goddesses' performance is bound to be judged by the equipment they lack.

Doug Bertelsen, who has been a serving firefighter for 23 years, is in the County Durham and Darlington Fire Brigade. He says that simply getting to fires could prove difficult for the replacement firemen. It is not only the army's vehicles which are green; the drivers will be inexperienced too, despite the MoD's insistence that they are trained in handling the 8.4-tonne vehicles.

-We get experience of driving in heavy traffic at high speeds," says Bertelsen. "You have to be experienced to do it well." One of his major worries is that drivers from the armed forces will be killed -trying to drive vehicles which are so years old. They won't have the stability of the modem engines, which are fast and designed as firefighting vehicles."

Roger Paice, general manager of Dennis Fire, which produces core models such as the Sabre and Rapier, agrees: "The Green Goddesses are 'sos technology so they will roll around the road a bit. We design products to keep up with traffic flow and their acceleration is faster than ordinary trucks. They are performance machines—that's what they are intended for."

Some Green Goddesses are said to have been refurbished with Cummins B-Series engines. But integral retarders, ABS, automatic transmission and other refinements not dreamt of by Bedford half a century ago are vital to today's appliance drivers.

And Paice echoes Scania's Crowther when he adds: "But when they get there the key difference is what they can do—firefighters these days are a panacea to all ills." As well as having specialist kit such as cutting equipment and so on, they are also trained as paramedics, he points out.

Another firefighter, with 29 years experience, says was promoted to driver in 1978, a year after the last strike: "What I learned to drive on was a crash gearbox but fire appliances have improved so much since then." The replacement vehicles, he points out, were behind the times even then. "I dread to think what driving a Green Goddess would be like," he concludes. There is still some hope that noone will have to find out.