O vercapacity has been cited as one reason for an "astounding 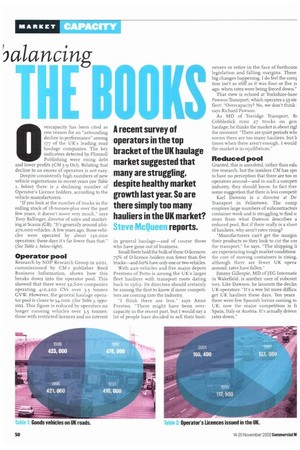 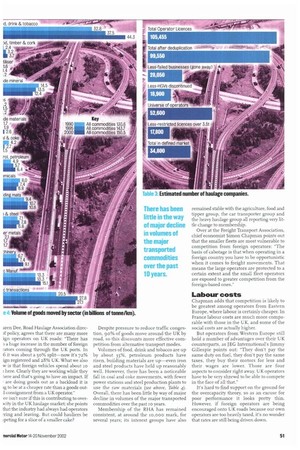 Page 50, 14th November 2002 — O vercapacity has been cited as one reason for an "astounding
Close
Noticed an error?
If you've noticed an error in this article please click here to report it so we can fix it.
Keywords : Haulage, Bus, Truck, Motoring Taxation In The United Kingdom, Business / Finance

decline in performance" among 177 of the UK's leading road haulage companies. The key indicators detected by Plimsoll Publishing were rising debt and lower profits (CM 3-9 Oct). Relating that decline to an excess of operators is not easy.

Despite consistently high numbers of new vehicle registrations in recent years (see Table 1, below) there is a declining number of Operator's Licence holders, according to the vehicle manufacturers.

"If you look at the number of trucks in the rolling stock of TS-tonnes-plus over the past few years. it doesn't move very much," says Tony Ballinger, director of sales and marketing at Scania (GB). "It's generally around 2602:70,000 vehicles. A few years ago, those vehicles were operated by about 130,000 operators; these days it's far fewer than that." (See Table 2. below right).

Research by NOP Research Group in 2001. commissioned by CM s publisher Reed Business Information, shows how this breaks down into the operator pool. This showed that there were 52,600 companies operating 410,200 CVs over 3.5 tonnes GVW. However, the general haulage operator pool is closer to 34,000. (See Table 3, opposite). This figure is reduced by operators no longer running vehicles over 3.5 tonnes; those with restricted licences and no interest

in general haulage—and of course those who have gone out of business.

Small fleets hold the bulk of these 0-licences: 75% of 0-licence holders run fewer than five trucks—and Go% have only one or two vehicles.

With 220 vehicles and five major depots Prestons of Potto is among the UK's larger fleet hauliers with transport roots dating back to 1969. Its directors should certainly be among the first to know if more competitors are coming into the industry.

"I think there are less," says Anne Preston. "There might have been overcapacity in the recent past, but I would say a lot of people have decided to sell their busi

nesses or retire in the face of forthcom legislation and falling margins. There big changes happening. I do feel the conq tion isn't as stiff as it was four or five y( ago, when rates were being forced down."

That view is echoed at Yorkshire-base Pawson Transport, which operates a 55-str fleet: "Overcapacity? No, we don't think : says Richard Pawson.

As MD of Torridge Transport, Bi Cobbledick runs 27 trucks on gen haulage; he thinks the market is about rigi the moment: "There are quiet periods whc seems there are too many hauliers, but b times when there aren't enough. I would the market is in equilibrium."

Granted, this is anecdotal, rather than exh tive research, but the insiders CM has spo to have no perception that there are too m operators around—and in such a competi industry, they should know. In fact ther some suggestion that there is less competit

Karl Dawson is a director at Di Transport in Felixstowe. The comp employs large numbers of subcontractors container work and is struggling to find o: ators from what Dawson describes a reduced pool. But if there really is a short of hauliers, why aren't rates rising?

"Manufacturers can't get the margin their products so they look to cut the cos the transport," he says. "The shipping li are experiencing tough market conditions the cost of moving containers is rising. although there are fewer UK opera: around, rates have fallen.'

Jimmy Gillespie, MD of JEG Intematic in Wakefield, is another user of subcont tors. Like Dawson, he laments the declin UK operators: "It's a wee bit more difficu: get UK hauliers these days. Ten years there were few Spanish lorries coming to UK; now the major competition is ft Spain, Italy or Austria. It's actually driven rates down."

aren Dee, Road Haulage Association dilec)fpolicy, agrees that there are many more ign operators on UK roads: "There has a huge increase in the number of foreign rators corning through the UK ports. In 6 it was about a 5o% split-now it's 72% ign registered and 28% UK. What we also w is that foreign vehicles spend about io ; here. Clearly they are working while they here and that's going to have an impact. If are doing goods out as a backload it is ig to be at a cheaper rate than a goods outconsignment from a UK operator."

'ee isn't sure if this is contributing to over!city in the UK haulage market; she points that the industry had always had operators :ring and leaving. But could hauliers be ipeting for a slice of a smaller cake? Despite pressure to reduce traffic congestion, 90% of goods move around the UK by road, so this discounts more effective competition from alternative transport modes.

Volumes of food, drink and tobacco are up by about 35%, petroleum products have risen, building materials are up-even iron and steel products have held up reasonably well. However, there has been a noticeable fall in coal and coke movements, with fewer power stations and steel production plants to use the raw materials (see above, Table 4). Overall, there has been little by way of major decline in volumes of the major transported commodities over the past ro years.

Membership of the RHA has remained consistent, at around the ro,000 mark, for several years; its interest groups have also remained stable with the agriculture, food and tipper group, the car transporter group and the heavy haulage group all reporting very little change to membership.

Over at the Freight Transport Association, chief economist Simon Chapman points out that the smaller fleets are most vulnerable to competition from foreign operators: "The basis of cabotage is that when operating in a foreign country you have to be opportunistic when it comes to freight movements. That means the large operators are protected to a certain extent and the small fleet operators are exposed to greater competition from the foreign-based ones."

Chapman adds that competition is likely to be greatest among operators from Eastern Europe, where labour is certainly cheaper. In France labour costs are much more comparable with those in the UK, and some of the social costs are actually higher.

But operators from Western Europe still hold a number of advantages over their UK counterparts, as JEG International's Jimmy Gillespie points out: "They don't pay the same duty on fuel, they don't pay the same taxes, they buy their motors for less and their wages are lower. Those are four aspects to consider right away. UK operators have to be very shrewd to be able to compete in the face of all that."

It's hard to find support on the ground for the overcapacity theory, so as an excuse for poor performance it looks pretty thin. However, if foreign operators are being encouraged onto UK roads because our own operators are too heavily taxed, it's no wonder that rates are still being driven down.