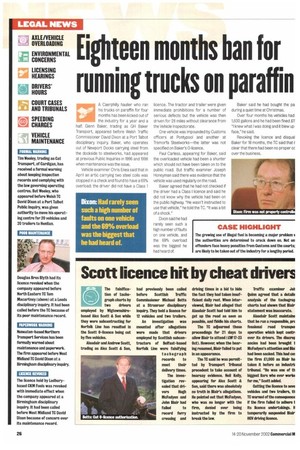 Page 26, 14th November 2002 — Scott licence hit by cheat drivers
Close
Noticed an error?
If you've noticed an error in this article please click here to report it so we can fix it.
Keywords : Tachograph, Hugh Mcfadyen

The falsification of tachograph charts by two drivers employed by Wigtownshirebased Alex Scott &, Son while they were subcontracting for Norfolk Line has resulted in the Scott 0-licence being cut by five vehicles.

Alasdair and Andrew Scott, trading as Alex Scott & Son, had previously been called before Scottish Traffic Commissioner Michael Betts at a Stranraer disciplinary inquiry. They held a licence for 12 vehicles and two trailers.

An investigation was mounted after allegations were made that drivers employed by Scottish subcontractors of Belfast-based Norfolk Line were falsifying tachograph records to meet their delivery times.

The investigation revealed that dri vers Hugh McFadyen and John Blair had failed to record ferry crossing and driving times in a bid to hide the fact they had taken insufficient daily rest. When interviewed, Blair had alleged that Alasdair Scott had told him to get up the road as soon as possible, and fiddle his charts.

The TC adjourned those proceedings for 21 days to allow Blair to attend (CM 17-23 Oct). However, when the hearing resumed, Blair failed to put in an appearance.

The TC said he was permitted by Transport Tribunal precedent to take account of hearsay evidence. Neil Kelly, appearing for Alex Scott & Son, said there was absolutely no truth in Blairs allegations. He pointed out that McFadyen, who was no longer with the firm, denied over being instructed by the firm to break the law. Traffic examiner Jot Quinn agreed that a detalle analysis of the tachograp charts had shown that Blair statement was inaccurate.

Alasdair Scott mantalne that he ran a responsible, prx fessional road transpoi operation which kept contr over its drivers. The discrep ancies had been brought 1 McFadyen's attention and Bla had been sacked. This had cm the firm 11,000 as BIA, ha taken it before an industrii tribunal. "He was one of th biggest liars who ever worke for me," Scott added.