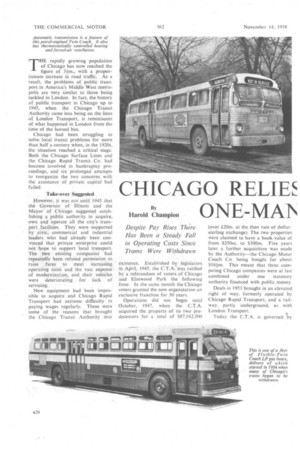 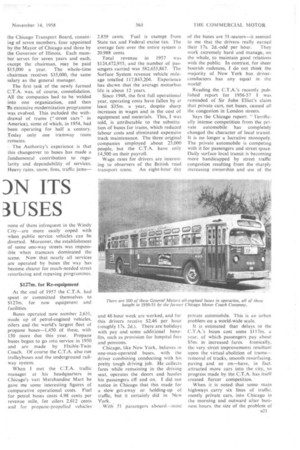 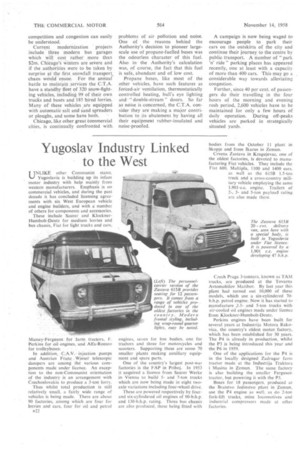 THE rapidly growing population of Chicago has now reached the figure of 31m., with a proportionate increase in road traffic. As a result, the problems of public transport in America's Middle West metro, polls aro very similar to those being tackled in London. In fact, the history of public transport in Chicago up to 1945, when the Chicago Transit Authority came into being on the lines of London Transport, is reminiscent of what happened in London from the time of the horsed bus.

Chicago had been struggling TO solve, local transit problems for more than half a century when, in the 1920s, the situation reached a critical stage. Both the Chicago Surface Lines and the Chicago Rapid Transit Co. had become involved in bankruptcy proceedings, and six prolonged attempts to reorganize the two concerns with the assistance of private capital had failed. .

However, it was not until 1945 that . , , the Governor of • Illinois and the Mayor of Chicago suggested establishing a _public authority to acquire, own and operate all the city's transport facilities,. They were supported by civic, commercial and industrial leaders who had already been 'convinced .that private enterprise could not hope to support local transport. The two existing companies had repeatedly been refused permission -to., 'raise . fares: to meet ' increasing operating Costs and the vast expense, of -modernization, and their vehicles were . deteriorating for lack of servicing.

New equipment had been impossible to acquire and Chicago Rapid Transport had extreme difficulty in paying wages regularly. These were some of the reasons that brought the Chicago Transit Authority into

existence. Established by legislation -in April, 1945, the C.T.A. -was ratified by a referendum Of voters of Chicago and Elmwood Park the following June. In the same month the Chicago voters granted the new organization an exclusive franchise for 50 years.

Operations did not begin until October, 1947, when the C.T.A. acquired the property of its two predecessors for a total of $87,162.500 (over £20m, at the then rate of dollarsterling exchange). The two properties were claimed to have a book value of from $250m. to $300m. Five years later a further acquisition was made by the Authority—the Chicago Motor Coach Co. being bought for about $161m. This meant that three competing Chicago companies were at last combined under one statutory authority financed with public money.

Deals in 1953 brought in an elevated right of way, formerly operated by Chicago Rapid Transport, and a rail-, way, partly underground, as with London Transport.

Today the C.T.A. is governed by the Chicago Transport Board, consisting of seven members, four appointed by the Mayor of Chicago and three by the Governor of Illinois. Each member serves for seven years and each, except the chairman, may be paid $15,000 a year. The whole-time chairman receives $35,000, the same salary as the general manager.

The first task of the newly formed C.T.A. was, of course, consolidation. All the companies had to be welded into one organization, and then rn extensive modernization programme was evolved. This included the withdrawal of trams (" street cars" in America), some of which, in 1954, had been operating for half a century. Today only one trarnway route remains.

The Authority's experience is that this changeover to buses has made a fundamental contribution to regularity and dependability of services. Heavy rains, snow, fires, traffic jams—

none of them infrequent in the Windy City—are more easily coped with when public service vehicles can be diverted. Moreover, the establishment of some one-way streets was impossible when tramcars dominated the scene. Now that nearly all services are operated by buses the way has become clearer for much-needed street resurfacing and repaving programmes.

Buses operated now number 2,63f, made up Of petrol-engined vehicles, oilers and the world's largest fleet of propane buses-1,450 of these, with 150 more due this year. . Propane buses began to go into service in 1950. and are made by Flxible-Twin Coach. Of course the C.T.A. also run trolleybuses and the underground railway system.

When I met the C.T.A. traffic manager at his headquarters in Chicago's vast Merchandise Mart he gave me some interesting figures of comparative operational costs. Fuel for petrol buses costs 4.98 cents per revenue mile, for oilers /612 cents and for propane-propelled vehicles 2.859 cents. Fuel is exempt from State tax and Federal excise tax. The average fare over the entire system is 20.988 cents, Total revenue in 1957 was $124,472,935, and the number of passengers carried was 582,655,867. The Surface System revenue vehicle mileage totalled 117,843,204. Experience has shown that the average motorbus life is about 12 years.

Since 1948, the first full operational year, operating costs have fallen by at least $35m. a year, despite sharp increases in wages and in the cost of equipment and materials. This, I was told, is attributable to the substitution of buses for trams, which reduced labour costs and eliminated expensive track maintenance. The three original companies employed about 23,000 people, but the C.T.A. have only 14,500 on their payroll.

Wage rates for drivers are interesting to observers of the British road transport scene. An eight-hour day and 48-hour week are worked, and for this drivers receive $2.46 per hour (roughly 17s. 2d.), There are holidays. with pay and some additional benefits, such as provision for hospital fees and pensions.

Chicago, like New York, believes in one-man-operated buses, with the driver combining conducting with his pretty tough driving job. He collects fares while remaining in the driving seat, operates the doors and hustles his passengers off and on. I did not notice in Chicago that this made for a slow get-away or h,olding-up of traffic, but it certainly did in New York. .

With 51 passengers aboard—most of the buses are 51-seaters.--it seemed to me that the drive-y.5. really earned

their 17s. 2d.-odd per hour. They work extremely hard and manage, on the whole, to maintain good relations with the public. In contrast, for sheer boorish rudeness, I do not think the majority of New York bus driverconductors has any equal in the world!

Reading the C.T.A.'s recently published report for 1956-57 I was reminded of Sir John Elliot's claim that private cars, not buses, caused all the congestion in London streets.

It is estimated that delays to the C.T.A.'s buses cost some $117m. year, of which passengers pay about $5m. in increased fares, ironically, the very street-improvements resultant upon the virtual abolition of trams-removal of tracks, smooth resurfacing, paving and so on—have, in fact, attracted more cars into, the city, so progress made bythe C.T.A. ha S itself created fiercer competition. • When it is noted that some main highways carry six lines of traffic, mostly private cars, into Chicago in the morning and outward after business hours, the size of the problem of competition and congestion can easily be understood.

Current modernization projects include three modern bus garages which will cost. rather more than $2m. Chicago's winters are severe and if the authorities were to be taken by surprise at the first snowfall transport, chaos would ensue. For the annual battle to maintain services the C.T.A. have a standby fleet of 320 snow-fighting vehicles, including 99 of their own trucks and buses and 185 hired lorries. Many of these vehicles are equipped with automatic salt and sand spreaders or ploughs, and some have both.

Chicago, like other great Commercial cities, is continually confronted with problems of air pollution and noise. One of the reasons behind the Authority's decision to pioneer largescale use of propane-fuelled buses was the odourless character of this fuel. Also in the Authority's calculation was, of course, the fact that this fuel is safe, abundant and of low cost.

Propane buses, like most of the other vehicles, have such features as forced-air ventilation, thermostatically controlled heating, bull's eye lighting and ." double-stream" doors. So far as noise is concerned, the C.T.A. consider they are making a major contribution to its abatement by having all their equipment rubber-insulated and noise-proofed. A campaign is now being waged to encourage people to park their cars on the outskirts of the city and continue their journey to the centre by public transport. A number of "park 'n' ride" parking places has appeared recently, one at least with a capacity of more than 400 cars. This may go a considerable way towards alleviating congestion.

Further, since 40 per cent. of passengers do their travelling in the four hours of the morning and evening rush period, 2,600 vehicles have to be maintained for only a few hours of daily operation. During off-peaks vehicles are parked in strategically situated yards.