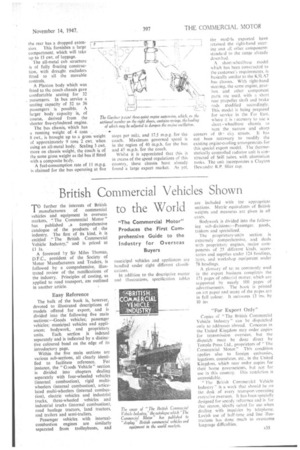 TO further the interests of British manufacturers of commercial vehicles and equipment in overseas markets, "The Commercial Motor" has published tomprehensive catalogue of the products of the industry. The first of its kind, it is entitled -"The British Commercial Vehicle Industry," and is priced at £1 ls. •

A foreword t y Sir Miles Thomas, D.F.C., president of the Society of Motor Manufacturers and Traders, is folfowed by a comprehensive, illustrated review of ; the ramifications of the industry. Principles of costing, as applied to road transport, afe outlined in another article.

Easy Reference The bulk of the book is, however, devoted to illustrated descriptions of models offered for export, and is divided into the following five main sections:—Goods vehicles; passenger vehicles; municipal vehicles and appliances; bodywork, and proprietary units. Each section is indexed separately and is indicated by a distinctive coloured band on the edge of its introductory page.

Passenger vehicles with internalcombustion engines are similarly separated from trolleyhuses, and

are included with me appropriate sections. Metric equivalents of British weights and measures are given in all cases.

Bodywork is divided into the following sub-divisions:—Passenger, goods, tankers and specialized.

The proprietary-units section is extremely comprehensive, and deals with proprietary engines, major components of 25 different kinds, accessories and supplies under 124 headings, tyres, and workshop equipment under 78 headings.

A glossary of tei.ns commonly used in the export business completes the 171 pages of editorial matter, which are supported by nearly 100 pages of advertisements. The book is printed on art paper and many of the paces are in full colour. It measures 13 ins. by 10 ins

Copies of " The British Commercial Vehicle industry " can be dispatched only to addresses abroad. Concerns in the United Kingdom may order copies for transmission overseas, but the dispatch must be done direct by Temple Press Ltd., proprietors of " The Commercial Motor." This condition applies also to foreign embassies, legations, consulates. etc.. in the United Kingdom, which may order copies for their home governments, but not for use in this country. This restriction is unavoidable.

" The British Commercial Vehicle Industry" is a work that should be on the desk of every transport-operating executive overseas. It has been specially designed for speedy reference and is for that reason, ideally suited for use when dealing with inquiries by telephone. Lavish use of half-tone and line illustrations has done much to overcome language difficulties.