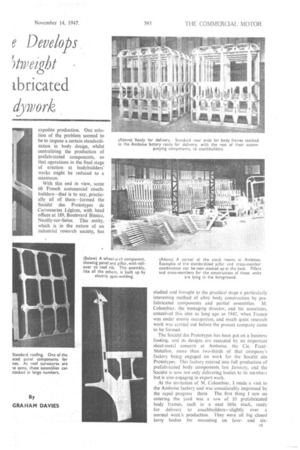 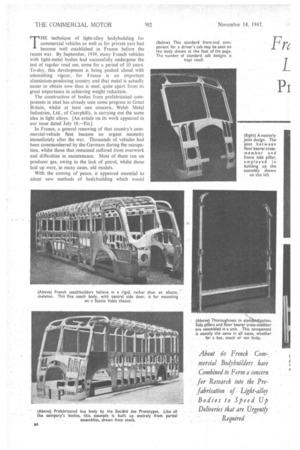 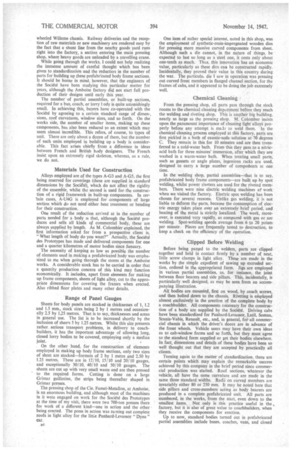 THE technique of light-alloy .bodybuilding for commercial vehicles as well as for private cars had become well established in France before the recent war. By September, 1939, many French vehicles with light-metal bodies had successfully undergone the test of regular road use, some for a period of 10 years. To-day, this development is being pushed ahead with astonishing vigour, for France is an important aluminium-producing country and that metal is actually easier to obtain now than is steel, quite apart from its great importance in achieving weight reduction.

The construction of bodies from prefabricated components in steel has already seen some progress in Great Britain, whilst at least one concern, Welsh Metal Industries, Ltd., of Caerphilly, is carrying out the same idea in light alloys. [An article on its work appeared in our issue dated July 18.—ED.1 In France, a general renewing of that country's commercial-vehicle fleet became an urgent necessity immediately after the war. Thousands of vehicles had been commandeered by the Germans during the occupation, whilst those that remained suffered from overwork and difficulties in maintenance. Most of them ran on producer gas, owing to the lack of petrol, whilst those laid up were, in many cases, old models.

With the coming of peace, it appeared essential to adopt new methods of bodybuilding which would expedite production. One solution of the problem seemed to be to impose a certain standardization in body design, whilst centralizing the production of prefabricated components, so that operations in the final stage of erection at bodybuilders' works might be reduced to a minimum.

With this end in view, some 60 French commercial coachbuilders—that is to say, practically all of them—formed the Societe' des Prototypes de Carrosseries Legeres, with head offices at 189, Boulevard Bineau, Neuilly-sur-Seine. This entity, which is in the nature of an industrial research society, has

(Above) A corner of the stock rooms at Amboise. Examples of the standardized pillar and cross-member combination can be seen stacked up at the back. Pillars and cross-members for the construction of these units are lying in the foreground.

studied and brought to the practical stage a particularly interesting method of alloy body construction by prefabricated components and partial assemblies. M. Colombier, the managing director, and his associates, conceived this idea as long ago as 1942, when France was under enemy occupation, and much quiet research work was carried out before the present company came to be formed.

The Societe des Prototypes has been put on a business footing, and its designs are executed by an important sheet4netal concern at Amboise, the Cie. FacelMetallon, more than two-thirds of that company's factory being engaged on work for the Societe des Prototypes. This factory entered into full production of prefabricated body components last January, and the Societe is now not only delivering bodies to its members but is also engaging in export work.

At the invitation of M. Colombier, I made a visit to the Amboise factory and was considerably impressed by the rapid progress there. The first thing I saw on entering the yard was a row of 10 prefabricated body frames, each in a neat little stack, ready

for delivery to coachbuilders—slightly over a normal week's production. They were all big closed lorry bodies for mounting on fourand six wheeled Willeme chassis. Railway deliveries and the reception of raw materials or new machinery are rendered easy by the fact that a shunt line from the nearby goods yard runs right into the factory, a section entering the main pressing shop, where heavy goods are unloaded by a travelling crane.

While going through the works, 1 could not help realizing the immense amount of careful thought which has been given to standardization and the reduction in the number of parts for building up these prefabricated body frame sections_ It should be borne in mind, however, that the engineers of the Societe have been studying this particular matter for years, although the Amboise factory did not start full production of their designs until early this year.

The number of partial assemblies, or built-up sections, required for a bus, coach, or lorry t ody is quite astonishingly small. In achieving this, buyers have co-operated with the Societe by agreeing to a certain standard range of dimen-, sions, roof curvatures, window sizes, and so forth. On the works side, the number of smaller items, making up these components, has also been reduced to an extent which may seem almost incredible. This refers, of course, to types of unit. There are only about a dozen of them, but the number of such units employed in building up a body is considerable. This fact arises chiefly from a difference in ideas between French and British body designers. The French insist upon an extremely rigid skeleton, whereas, as a rule, we do not.

Alloys employed are of the types A-G3 and A-G5, the first being reserved for coverings (these are supplied in standard dimensions by the Societe), which do not affect the rigidity of the ensemble, whilst the second is used for.the construction of a rigid framework in built-up components. In cer'lain cases, A-U4G is employed for components of large section which do not need either heat treatment or bending for their construction.

One result of the reduction arrived at in the number of parts needed for a body is that, although the Societe produces and sells all kinds o,f commercial body, these are always supplied by length. AS M. Colombier explained, the first information asked for from a prospective client is, "What length of body do you want?" Actually, the Societe des Prototypes has made and delivered components for one and a quarter kilometres of motor bodies since January.

The necessity of keeping as low as possible the number of elements used in making a prefabricated body was emphasized to me when going through the stores at the Amboise works. A considerable stock has to be carried in order that a quantity production concern of this kind may function economically. It includes, apart from elements for making up frame components, sheets of light alloy, cut to the appropriate dimensions for covering the frames when erected. Also ribbed floor plates and many other details.

Sheets for body panels are stocked in thicknesses of 1, 1.2 and 1.5 mm., stock sizes being 2 by 1 metres and occasionally 2.5 by 1,25 metres. That is to say, thicknesses and areas in general use. The list is to be increased shortly by the inclusion of sheets 5 by 1.25 metres. Whilst this size presents rather serious transport problems, in delivery to coachbuilders, it has the important advantage of allowing long, closed lorry bodies to be covered, employing only a median joint.

On the other hand, for the construction of elements employed in making up body frame sections, only two sizes of sheet are stocked—formats of 2 by 1 metre and 2.50 by 1.25 metres. These are in 12/10, 15/10 and 20/10 gauges, and exceptionally 30/10, 40/10 and 50/10 gauges. The sheets are cut up with very small waste and are then pressed • to the required forms. Cutting is done on a large Grimar guillotine, the strips being thereafter shaped in Grimar presses.

The pressing shop of the Cie. Famel-Metallon, at Amboise, is an enormous building, and although most of the machines in it were engaged on work for the Societe des Prototypes at the time of my visit, there were two 700-ton presses there fot work of a different kind—one in action and the other being erected. The press in action was turning out complete roofs in light alloy for the littie Panhard-Levassor " Dyna " car.

a 6 One item of rather special interest, noted in this shop, was the employment of synthetic-resin-impregnated wooden dies for pressing more massive curved components from sheet. Although such a die cannot, in the nature of things, be expected to last so long as a steel one, it costs only about one-tenth as much. Tht.s, this innovation has an economic value, particularly as these dies can be constructed rapidly. Incidentally, they proved their value in this country during the war. The particulal die I saw in operation was pressing out curved front members in flanged channel section, for the frames of cabs, and it appeared to be doing the job extremely well.

From the pressing shop, all parts pass through the stock rooms to the chemical cleaning department before they reach the welding and riveting shop. This is another big building, nearly as large as the pressing shop. M. Colomber insists upon the paramount importance of cleaning light alloys properly before any attempt is ma 3..t to weld them. In the chemical cleaning process employed at this factory, parts are first pickled in a bath of caustic-soda solution at 70 degrees C. They remain in this for 10 minutes and are then transferred to a cold-water bath. From this they pass to a nitricacid bath for three minutes' immersion, after which they are washed in a warm-water bath. When treating small parts, such as gussets or angle plates, ingenious racks are used, designed to carry a large number of comporients at one time.

In the welding shop, partial assemblies—that is to say, prefabricated body frame components—are built up by spot welding, whilst power riveters are used for the riveted members. There were nine electric welding machines a? work when we visited the factory. Electric spot welding has been chosen for several reasons. Unlike gas welding, it is not liable to deform the parts, because the consumption of electric energy takes place over an extremely brief period, and heating of the metal is strictly localized. The work, moreover, is executed very rapidly, as compared with gas or arc welding. Spot-welding speeds average from 6 to 20 points per minute Pieces are frequently tested to destruction, to keep a check on the efficiency of the operation.

Before being passed to the welders, parts are clipped together and held in contact firmly by a number of neat, little screw clamps in light alloy. These are made in the works by the simple expedient of sawing up extruded section, ordered in the appropriated form. Jigs are employed in various partial assemblies, as, for instance, the joint between floor bearers and side pillars. This, incidentally, is particularly well designed, as may be seen from an accompanying illustration.

All bodies are mounted, first on wood, by coach screws, and then bolted down to the chassis. Riveting is einployed almost exclusively in the erection of the complete body by a coachbuilder. All components necessary for the construction of a body are supplied by the Societe. Driving cabs have been standardized for Panhard-Levassor, Latil, Somua, Scania-Vabis, Renault, etc., and, in general, for all commercial chassis in which the driver's doors are in advance of the front wheels. Vehicle users may have their own ideas as to cab-window forms and so forth, but they must agree to the standard form supplied or get their bodies elsewhere. In fact, dimensions and details of these bodies have been so well thought out that they are accepted by practically all clients.

Turning again to the matter of standardization, there are certain points which may explain the remarkable success achieved by this company in the brief period since commercial production was started. Roof sections, whatever the vehicle, all have the same curvature and are made in the same three standard widths. Radii on curved members are invariably either 80 or 250 mm. It may be noted here that side pillars and cross-members acting as body bearers are produced in a complete prefabricated unit. All parts are numbered, in the works, from the start, even down to the smallest items. Not only is this practice useful in the factory, but it is also of great value to coactibuilders, when they receive the components for erection.

Up to now, standard bodies turned out in prefabricated partial assemblies include buses, coaches, vans, and closed