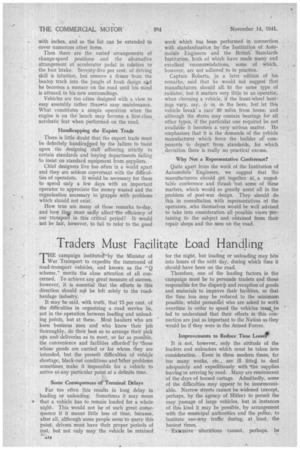 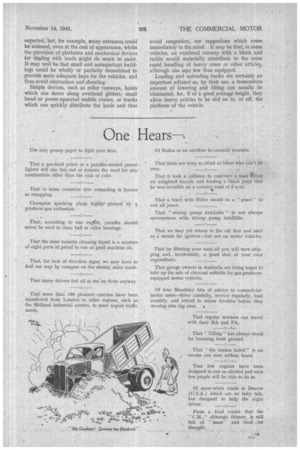 Page 16, 14th November 1941 — Traders Must Facilitate Load Handling
Close
Noticed an error?
If you've noticed an error in this article please click here to report it so we can fix it.
Keywords : Logistics, Ancient Greek Technology, Cranes, Transport

THE campaign instituted•by the Minister of War Transport to expedite the turnround of road-transport vehicles( and known as the "Q scheme," merits the close attention of all concerned. To achieve any great measure of success, however, it is essential that the efforts in this direction should ncit be left solely to the roadhaulage industry.

It may be said, with truth, that 75 per cent, of the difficulties in organizing a road service lie, not in the operation between loading and unloading points, but at these. Most hauliers who are keen business men and who know their job thoroughly, do their pest so to arrange their pick ups and deliveries as to meet, so far as possible, the convenience and facilities afforded' by 'those whose goods Pare carried or for whom they are intended, but the present difficulties of vehicle shortage, black-out conditions and lather problems sometimes make it impossible for a vehicle to arrive at-any particular point at a definite time.

Some Consequences of Terminal D_elays Far too often this results in long delay in loading or unloading. Sometimes it may mean • that a vehicle has to remain loaded for a whole night. This would not be of such great conse: quence if it meant little loss of time, because, after all, although some people seem to query this point, drivers must have their proper periods of rest, but not only may the vehicle be retained for the night, but loading or unloading may bite into hours of the nekt day, during which time it should have been on the road.

Therefore, one of the leading factors in the campaign must be to persuade traders and those responsible for the dispatch and receptionrof goods and materials to improve their facilities, so that the time loss may be reduced to the minimum possible, whilst personnel who are asked to wol-k overtime in order to speed the vehicles must be led to understand that their efforts in this connection are just as important to the Nation as they would be if they were in the Armed Forces.

Improvements to Reduce_ Time Losser It is not, however, only the attitude of the loaders and unIoaders which must be taken into consideration. Even in these modern times, far too many works, etc., are ill fitted to deal adequately and expeditiously with 'the supplies leaving or arriving by road. Many are reminiscent of the days of horsed cartage. Admittedly, some of the difficulties may appear to be insurmountable. Narrow streets cannot be widened (except, perhaps, by the agency of Hitler) to permit the easy passage of large vehicles, but in instances of this kind it may be 'possible, by arrangement with the municipal authorities and the police, to institute one-way traffic during, at least,the busiest times, Extcnsive 'alterations cannot, perhaps, be expected, but, for example, many entrances could be widened, even At the cost of appearance, whilst the provision of platforms and mechanical devices for dealing with loads might do much to assist. It may well be that small and unimportant buildings could be wholly or partially demolished to provide more adequate bays for the vehicles, and thus avoid obstruction and shunting. Sim'ple devices, such as roller runways, hoists which can move along overhead girders, small hand or power-operated mobile cranes, or trucks which can quickly distribute the loads and thus avoid congestion, are suggestions which come immediately to the mind. It may be that, in some vehicles, an overhead runway with a block and tackle would materially contribute to the more rapid handling of heavy cases or other articles, although one se,es few thus equipped. Loading and unloading banks are certainly an important adjunct as, by their use, a tremendous amount of lowering and lifting can usually be 'eliminated, for, if of a good average height, they allow heavy articles to be slid on to, or off, the platform of the vehicle.