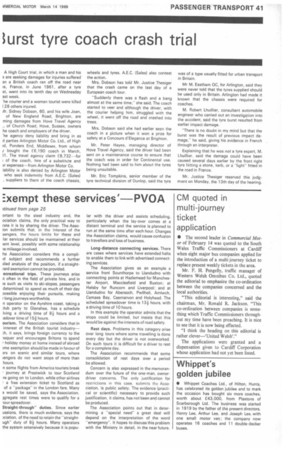 Page 43, 14th March 1969 — urst tyre coach crash trial
Close
Noticed an error?
If you've noticed an error in this article please click here to report it so we can fix it.
Keywords : Tires, Disaster / Accident, Sports

A High Court trial, in which a man and his 9 are seeking damages for injuries suffered an a British coach ran off the road near is, France, in June 1961, after a tyre st, went into its tenth day on Wednesday ast week.

"he courier and a woman tourist were killed I 28 others injured.

Ar. Sidney Dobson, 60, and his wife Joan, of New England Road, Brighton, are ming damages from Hove Travel Agency ., of Church Road, Hove, Sussex, owners he coach and employers of the driver.

Mrs. Dobson has told Mr. Justice Thesiger that the crash came on the last day of a European coach tour.

"Suddenly there was a flash and a bang almost at the same time," she said, The coach started to veer and although the driver, with the courier helping him, struggled with the wheel, it went off the road and crashed into trees.

Mrs. Dobson said she had earlier seen the coach in a picture when it won a prize for safety at a Concours d'Elegance at Brighton.

Mr. Peter Hayes, managing director of Hove Travel Agency, said the driver had been sent on a maintenance course to ensure that the coach was in order for Continental use. Nothing had been said to him about the tyres being unsuitable.

Mr. Eric Tompkins, senior member of the tyre technical division of Dunlop, said the tyre was of a type usually fitted for urban transport in Britain.

Mr M. Eastham QC, for Arlington, said they were never told that the tyres supplied should be used only in Britain. Arlington had made it known that the chassis were required for coaches.

M. Robert Lhuillier, consultant automobile engineer who carried out an investigation into the accident, said the tyre burst resulted from earlier impact damage.

"There is no doubt in my mind but that the burst was the result of previous impact damage," he said, giving his evidence in French through an interpreter.

Explaining that he was not a tyre expert, M. Lhuillier, said the damage could have been caused several days earlier by the front right tyre hitting a stone, kerb, or a "light" fitted in the road in France.

Mr. Justice Thesiger reserved this judgment on Monday, the 13th day of the hearing.