Welding Raised from Suspicion to Approbation 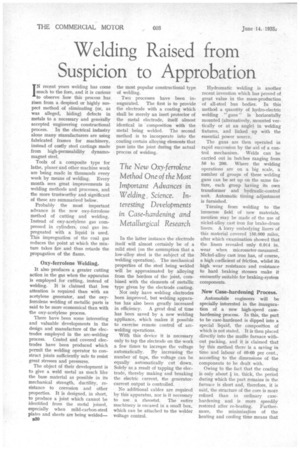 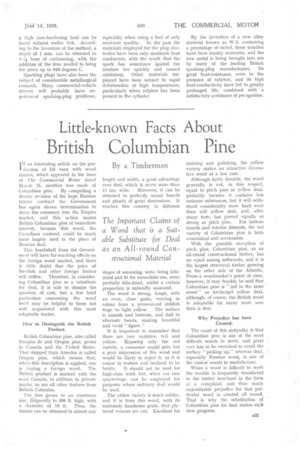 Page 40, 14th June 1935 — Welding Raised from Suspicion to Approbation
Close
Noticed an error?
If you've noticed an error in this article please click here to report it so we can fix it.

IN recent years welding has come much to the fore, and it is curious to observe how this process has• risen from a despised or highly suspect method of eliminating (or, as was alleged, hiding) defects in metals to a necessary and geneially accepted engineering constructional

process. In the electrical industry alone many manufacturers are using fabricated frames for machinery, instead of costly steel castings made from high-permeability dynamomagnet steel.

Tools of a composite type for lathe, planer and other machine work are being made in thousands every week by means of welding. Every month sees great improvements in welding methods and processes, and the more trustworthy and significant of these are summarized below.

Probably the most important advance is the new oxy-ferrolene method of cutting and welding. Instead of oxy-acetylene gas compressed in cylinders, coal gas impregnated with a liquid is used. This impregnation of the coal gas reduces the point at which the mixture takes fire and thus retards the propagation of the flame.

It also produces a greater cutting action in the gas when the apparatus is employed for cutting, instead of welding. It is claimed that less attention is required than with an acetylene generator, and the oxyferrolene welding of metallic parts is said to be more economical than with the oxy-acetylene process.

There have been some interesting and valuable developments in the design and manufacture of the electrodes employed in the arc-welding process. Coated and covered electrodes have been produced which permit the welding operator to construct joints sufficiently safe to resist great stresses and pressures.

The object of their development is to give a weld metal as much like the base material as possible in its mechanical strength, ductility, resistance to corrosion and other properties. It is designed, in short, to produce a joint which cannot be identified from the metal joined, especially when mild-carbon-steel plates and sheets are being welded 330 the most popular constructional type of welding.

Two processes have been inaugurated. The first is to provide the electrode with a coating which shall be merely an inert protector of the metal electrode, itself almost identical in composition with the metal being welded. The second method is to incorporate into the coating certain alloying elements that pass into the joint during the actual process of welding.

In the latter instance the electrode itself will almost certainly be of a mild steel (on the assumption that a low-alloy steel is the subject of the welding operation). The mechanical properties of the steel being welded will be approximated by alloying from the borders of the joint, combined with the elements of metallic type given by the electrode coating.

Not only have welding electrodes been improved, but welding apparatus has also been greatly increased in efficiency. A great deal of time has been saved by a new welding appliance, which makes it possible to exercise remote control of arcwelding operations.

No additional cables are required by this apparatus, nor is it necessary to use •a rheostat. The entire machinery is encased in a small box, which can be attached to the welder voltage control. Hydromatic welding is another recent invention which has proved of great value in the mass-production of all-steel bus bodies. In this method a quantity of hydro-electric welding " guns " is horizontally mounted (alternatively, mounted vertically or at an angle) in welding fixtures, and linked up with the essential power source.

The guns are then operated in rapid succession by the aid of a control mechanism. Welds can be carried out in batches ranging from 50 to 200. Where the welding operations are on a big scale, a number of groups of these welding guns can be set up on the same fixture, each group having its own transformer and hydraulic-control unit. Automatic timing adjustment is furnished.

Turning from welding to the immense field of new materials, mention may be made of the use of nickel-alloy cast iron for brake-drum liners. A lorry embodying liners of this material covered 150,000 miles, after which examination showed that the liners revealed only 0.014 in. wear when micrometer-measured. Nickel-alloy cast iron has, of course, a high ccefficient of friction, whilst its high wear resistance and resistance to hard braking stresses make it eminently suitable for braking-system components.

Automobile engineers will he specially interested in the inauguration of a new high-speed casehardening process. In this, the part to be case-hardened is dipped into a special liquid, the composition of which is not stated. It is then placed directly into the muffle furnace without packing, and it is claimed that by this method there is a saving in time and labour of 40-60 per cent., according to the dimensions of the components to be dealt with.

Owing to the fact that the coating is only about in. thick, the period during which the part remains in the furnace is short and, therefore, it is said, the structure of the core is more refined than in ordinary casehardening and is more speedily

restored after re-heating. Furthermore, the minimization of the heating and cooling time means that

a high case-hardening heat can be faced without undue risk. According to the inventors of the method, a depth of 1 mm. can be obtained in 1-11 hour of carbonizing, with the addition of the time needed to bring the piece up to 940 degrees C.

Sparking plugs have also been the subject of considerable metallurgical research. Many commercial-vehicle drivers will probably have experienced sparking-plug problems, especially when using a fuel of only moderate quality. In the past the materials employed for the plug electrodes have been only moderate heat conductors, with the result that the spark has sometimes ignited the mixture too quickly and caused mistiming. Other materials employed have been subject to rapid deterioration at high temperatures, particularly when sulphur has been present in the cylinder. By the invention of a new alloy material known as W.5, containing a percentage of nickel, these troubles have been mainly overcome, and the new metal is being brought into use by many of the leading British sparking-plug manufacturers. Its great heat-resistance, even in the presence of sulphur, and its high heat-conductivity have led to greatly prolonged life, combined with a satisfactory avoidance of pre-ignition.