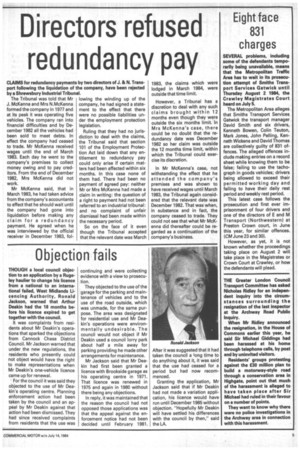 SEVERAL problems, including some of the defendants temporarily being unavailable, means that the Metropolitan Traffic Area has to wait in its prosecution attempt of Smiths Transport Services Gatwick until Thursday August 2 1984, the Crawley Magistrates Court heard on July 5.

The Metropolitan Area alleges that Smiths Transport Services Gatwick the transport manager David Smith and six drivers, Kenneth Bowen, Colin Teuton, Mark Jones, John Pelling, Kenneth Wickens and David Thomas are collectively guilty of 831 offences. The alleged offences include making entries on a record sheet while knowing them to be false; failing to use the tachograph in goods vehicles; drivers being allowed to exceed their permitted working day and failing to have their daily rest period and weekly rest period.

This latest case follows the prosecution and first ever imprisonment of four drivers and one of the directors of E and M Transport (Northwestern) at Preston Crown court, in June this year, for similar offences. (CM June 23 and 30).

However, as yet, it is not known whether the proceedings taking place on August 2 will take place in the Magistrates or Crown Court at Crawley, or how the defendants will plead.