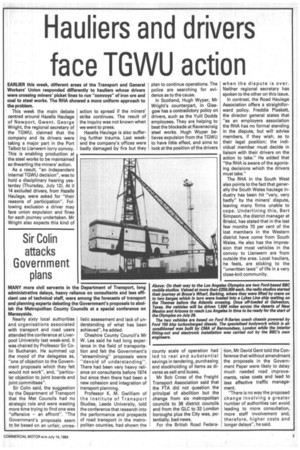 Page 5, 14th July 1984 — Sir Cohn attacks Government plans
Close
Noticed an error?
If you've noticed an error in this article please click here to report it so we can fix it.
Keywords : Local Government In England, Metropolitan County, Politics

MANY more civil servants in the Department of Transport, long administrative delays, heavy reliance on consultants and less efficient use of technical staff, were among the forecasts of transport and planning experts debating the Government's proposals to abolish the Metropolitan County Councils at a special conference on Merseyside.

Nearly sixty local authorities and organisations associated with transport and road users attended the conference at Liverpool University last week-end. It was chaired by Professor Sir Colin Buchanan. He summed up the mood of the delegates as, "one of objection to the Government proposals which they felt would not work", and, "particular objection to joint boards and joint committees".

Sir Colin said, the suggestion by the Department of Transport that the Met Councils had no strategic role and were wasting more time trying to find one was "offensive — an affront", "The Government's proposals seem to be based on an unfair, unrea listic assessment and lack of understanding of what has been achieved", he added.

Cheshire County Council's Mr W. Lea said he had long experience in the field of transportation and felt the Government's "streamlining" proposals were "devoid of understanding". There had been very heavy reliance on consultants before 1974 but since then there had been a new cohesion and integration of transport planning.

Professor K. M, Gwilliam of the Institute of Transport Studies, Leeds University, told the conference that research into the performance and prospects of road transport in the metropolitan counties, had shown the county scale of operation had led to real and substantial savings in tendering, purchasing and stockholding of items as diverse as salt and buses.

Mr Bob Cross of the Freight Transport Association said that the FTA did not question the principal of abolition but the change from six metropolitan councils to 36 district councils and from the GLC to 32 London boroughs plus the City was, potentially, bad news.

For the British Road Federa tion, Mr David Gent told the Conference that without amendment the proposals in the Government Paper were likely to delay much needed road improvements, raise costs and lead to less effective traffic management.

"There is no way the proposed change involving a greater number of authorities can avoid leading to more consultation, more staff involvement and, therefore, higher costs and longer delays", he said.