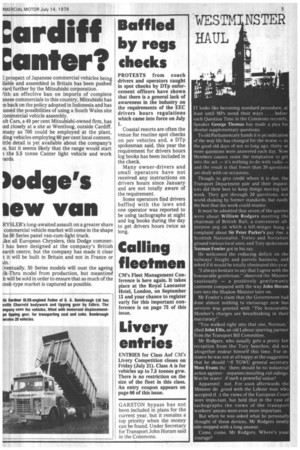 IT looks like becoming standard procedure, at least until MPs mend their ways . . before each Question Time in the Commons recently, Speaker George Thomas has made a plea for shorter supplementary questions.

To old Parliamentary hands it is an indication of the way life has changed for the worse — in the good old days of not so long ago, thirty or more questions were answered each day. Now Members cannot resist the temptation to get into the act — it's nothing to do with radio — and the result is that fewer than 20 questions are dealt with on occasions.

Though, to give credit where it is due, the Transport Department pair and their inquisitors did their best to keep things moving last week. They got through 29 questions, not world-shaking by former standards, but easily the best that the week could muster, It must be admitted that seven of the queries were about William Rodgers meeting the chairman of British Rail, a convenient allpurpose peg on which a left-winger hung a complaint about Sir Peter Parker's pay rise, a Scottish Nationalist, Tories and Socialists ground various local axes, and Tory spokesman Norman Fowler got in his say.

He welcomed the reducing deficit on the railways' freight and parcels business, and asked if it would be totally eliminated this year.

"I always hesitate to say that I agree with the honourable gentleman," observed the Minister cautiously — a positively gentlemanly comment compared with the way John Horam tore into the Shadow Minister later on.

Mr Fowler's claim that the Government had done almost nothing to encourage new bus services was greeted with "The honourable Member's charges are breathtaking in their inaccuracy".

"You walked right into that one. Norman,jibed John Ellis, an old Labour sparring partner from the Transport Bill Committee.

Mr Rodgers, who usually gets a pretty fair reception from the Tory benches, did not altogether endear himself this time. For instance he was not at all happy at the suggestion that he should `..)1I TGWU general secretary Moss Evans the there should be no industrial action against .impanies installing rail sidings. Was he scare(' )f such a powerful union?

Apparentlnot. For soon afterwards the Minister dis greed with the Labour man who accepted tt ,t the views of the European Court were impoftant, but held that in the case of tachographs the views of the transport workers' unions were even more important. But when he was asked what he personally thought of these devices, Mr Rodgers neatly side-stepped with a long answer.