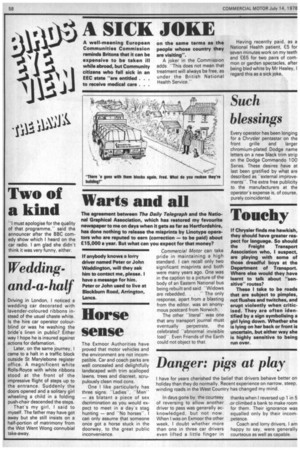 Page 60, 14th July 1978 — Wedding
Close
Noticed an error?
If you've noticed an error in this article please click here to report it so we can fix it.
Keywords : Colourblind, Lavender, Wedding, Rolls-royce

Driving in London, I noticed a wedding car decorated with lavender-coloured ribbons instead of the usual chaste white. Is the hire car operator colourblind or was he washing the bride's linen in public? Either way I hope he is insured against actions for defamation.

Later, on the same journey, I came to a halt in a traffic block outside St Marylebone register office. A magnificent white Rolls-Royce with white ribbons stood at the front of the impressive flight of steps up to the entrance. Suddenly the doors opened and a solitary girl wheeling a child in a folding push-chair descended the steps.

That's my girl, I said to myself. The father may have got away but she still insists on a half-portion of matrimony from the Wot Went Wong connubial take-away. If anybody knows a lorry driver named Peter or John Waddington, will they ask him to contact me, please. I have a message for him. Peter or John used to live at Blackburn Road, Arrington, Lancs.