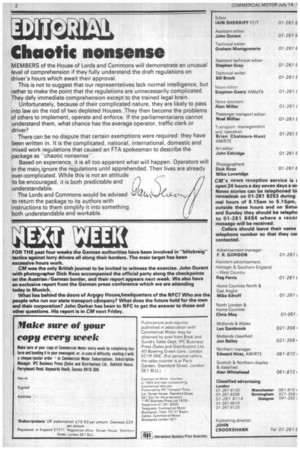 Page 4, 14th July 1978 — Chaotic nonsense
Close
Noticed an error?
If you've noticed an error in this article please click here to report it so we can fix it.

MEMBERS of the House of Lords and Commons will demonstrate an unusual level of comprehension if they fully understand the draft regulations on driver's hours which await their approval.

This is not to suggest that our representatives lack normal intelligence, but rather to make the point that the regulations are unnecessarily complicated. They defy immediate comprehension except to the trained legal brain.

Unfortunately, because of their complicated nature, they are likely to pass into law on the nod of two depleted Houses. They then become the problems of others to implement, operate and enforce. If the parliamentarians cannot understand them, what chance has the average operator, traffic clerk or driver?

There can be no dispute that certain exemptions were required: they have been written in. It is the complicated, national, international, domestic and mixed work regulations that caused an FTA spokesman to describe the .package as "chaotic nonsense". Based on experience it is all too apparent what will happen. Operators will in the main, ignore the regulations until apprehended. Their lives are already over-complicated. While this is not an attitude to be encouraged, it is both predictable and understandable.

The Lords and Commons would be advised to return the package to its authors with instructions to them simplify it into something both understandable and workable.