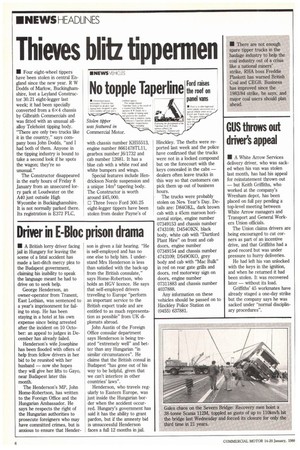 • Four eight-wheel tippers have been stolen in central England since the new year. R W Dodds of Marlow, Buckinghamshire, lost a Leyland Constructor 30.21 eight-legger last week; it had been specially converted from a 6x4 chassis by Gilbraith Commercials and was fitted with an unusual allalloy Telehoist tipping body. "There are only two trucks like it in the country," says company boss John Dodds, "and I had both of them. Anyone in the tipping industry is bound to take a second look if he spots the wagon; they're so unusual."

The Constructor disappeared in the early hours of Friday 8 January from an unsecured lorry park at Loudwater on the A40 just outside High Wycombe in Buckinghamshire. It is not normally parked there. Its registration is E372 FLC, with chassis number KH55513, engine number 8661478TL11, gearbox number J6/1732 and cab number 12681. It has a blue cab with a white roof and white bumpers and wings.

Special features include Hendrickson Norde suspension and a unique 14m3 tapering body. The Constructor is worth around £45,000.

E Three Iveco Ford 300.25 eight-legger tippers have been stolen from dealer Payne's of Hinckley. The thefts were reported last week and the police have confirmed that the trucks were not in a locked compound but on the forecourt with the keys concealed in the cabs — dealers often leave trucks in this way so that customers can pick them up out of business hours.

Any information on these vehicles should be passed on to Hinckley Police Station on (0455) 637881.