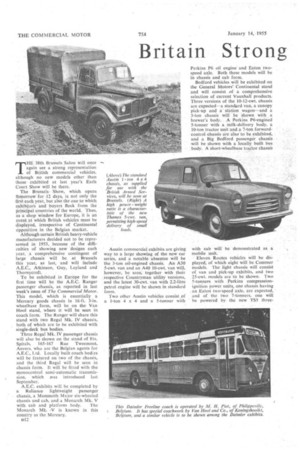 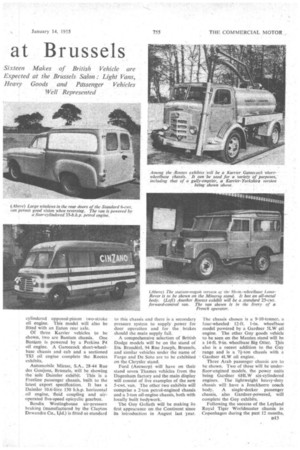 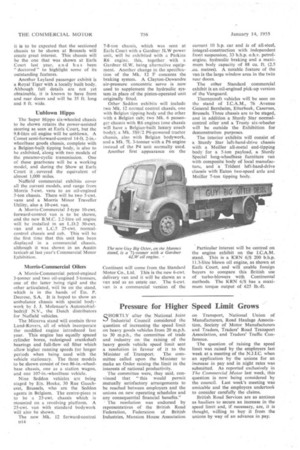 Page 52, 14th January 1955 — Britain Strong at Brussels
Close
Noticed an error?
If you've noticed an error in this article please click here to report it so we can fix it.

Sixteen Makes of British Vehicle are Expected at the Brussels Salon : Light Vans, Heavy Goods and Pdssenger Vehicles Well Represented THE 38th Brussels Salon will once again see a strong representation of British commercial vehicles, although no new models other than those exhibited at last year's Earls Court Show will be there.

The Brussels. Show, which opens tbmorrow for 12 days, is not only the first each year, but also the one to which exhibitors and buyers flock from the principal countries of the world. Thus, as a shop window for Europe, it is an event at which British vehicles must be displayed, irrespective of Continental opposition in the Belgian market.

Although certain British heavy-vehicle manufacturers decided not to be represented in 1953, because of the difficulties of showing new designs each year, a comprehensive contingent of large chassis will be at Brussels this year, as last, and will include A.E.C., Atkinson, Guy, Leyland and Thomycroft.

To be exhibited in Europe for the first time will be the A.E.C. Ranger passenger chassis, as reported in last week's issue of The Commercial Motor. This model, which is essentially a Mercury goods chassis in 16-ft. 3-in, wheelbase form, will be on the Van Hoot stand, where it will be seen in coach form. The Ranger will share this stand with two Regal Mk. IV chassis, both of which are to be exhibited with single-deck bus bodies.

Three Regal Mk. IV passenger chassis will also be shown on the stand of Eta. Spitals, 165-167 Rue Tweemont, Anvers, who arc the Belgian agents for A,E.C., Ltd. Locally built coach bodies will be featured on two of the chassis, and the third Regal will be seen in chassis form. It will be fitted with the monocontrol semi-automatic transmission, which was introduced last September.

A.E.C. exhibits will be completed by a Reliance lightweight passenger chassis, a Mammoth Major six-wheeled chassis and cab, and a Monarch Mk. V with cab and platform body. The Monarch Mk. -V is known in this country as the Mercury.

D12 Austin commercial exhibits are giving way to a large showing of the new car series, and a notable absentee will be the 3-ton oil-engined chassis. An A30 5-cwt. van and an A40 10-cwt. van will, however, be seen; together with their respective Countryman utility versions, and the latest 30-cwt. van with 2.2-litre petrol engine will be shown in standard form.

Perkins P6 oil engine and Eaton twospeed axle. Both these models will be in chassis and cab form.

Bedford vehicles will be exhibited on the General Motors' Continental stand and will consist of a comprehensive selection of current Vauxhall products. Three versions of the 10-12-cwt. chassis are expected—a standard van, a canopy pick-up and a station wagon—and a 3-ton chassis will be shown with a brewer's body. A Perkins P6-engined 5-tonner with a milk-delivery body, a 10-ton tractor unit and a 7-ton forwardcontrol chassis are also to be exhibited, and a Big Bedford passenger chassis Will he shown with a locally built bus body. A short-wheelbase tractor chassis with cab will be demonstrated as a mobile unit.

Eleven Rootes vehicles will be displayed, of which eight will be Commer models. The light chassis will consist of van and pick-up exhibits, and two 25-cwt. models are to be shown. Two 5-tonners with Perkins compressionignition power units, one chassis having an Eaton two-speed axle, arc expected, and of the two 7-tonners, one will be powered by the new 1'S3 three cylindered opposed-piston two-stroke oil engine. This model will also be fitted with an Eaton rear axle.

Of three K.arrier vehicles to be shown, two are Bantam chassis. One Bantam is powered by a Perkins P4 oil engine. A Gamecock short-wheelbase chassis and cab and a sectioned TS3 oil engine complete the Rootcs exhibits.

Bendix Westinghouse air-pressure braking (manufactured by the Clayton Dewandre Co., Lid.) is fitted as standard to this chassis and there is a secondary pressure system to supply power for door operation and for the brakes should the main supply fail.

A comprehensive selection of British Dodge models will be on the stand of Ets. Brondeel, 94 Rue Joseph, Brussels, and similar vehicles under the name of Fargo and De Soto are to be exhibited on the Chrysler stand.

Ford (Antwerp) will have on their stand seven Thames vehicles from the Dagenham factory and the main display will consist of five examples of the new 5-cwt. van. The other two exhibits will comprise a 2-ton petrol-engined chassis and a 3-ton oil-engine chassis, both with locally built bodywork.

The Guy Goliath will be making its first appearance on the Continent since its introduction in August last year. The chassis chosen is a 9-10-tonner, four-wheeled 12-ft, 1-in. wheelbase model powered by a Gardner 5LW oil engine. The other Guy goods vehicle to be seen on the Marines stand will be a 14-ft. 9-in. wheelbase Big Otter. This also is a recent addition to the Guy range and is a '7k-ton chassis with a Gardner 4LW oil engine.

Three Arab passenger chassis are to he shown. Two of these will be underfioor-engined models, the power units being Gardner 6HLW six-cyliridered engines. The lightweight heavy-duty chassis will have a Jonckheere coach body. A single-decker passenger chassis, also Gardner-powered, will complete the Guy exhibits.

Following the success of the Leyland Royal Tiger Worldmaster chassis in Copenhagen during the past 12 months, D13 it is to be expected that the sectioned chassis to be shown at Brussels will create great interest. This chassis will be the one that was shown at Earls Court last year and has been " doctored" to highlight some of its outstanding features.

Another Leyland passenger exhibit is a Royal Tiger with a locally built body. Although full details are not yet obtainable, it is known to have front and rear doors and will be 35 ft, long and 8 ft. wide.

Unblown Hippo The Super Hippo six-wheeled chassis to be shown retains the power-assisted steering as seen at Earls Court, but the 9.8-litre oil engine will be unblown. A Comet semi-forward-control 14-ft. 2-in,wheelbase goods chassis, complete with a Belgian-built tipping body, is also to be exhibited, along with two models of the pneumo-cyclic transmission. One of these gearboxes will be a working model, and during the Show at Earls Court it . covered the equivalent of almost 1,000 miles.

Nuffield commercial exhibits cover all the current models, and range from Morris 5-cwt. vans to an oil-engined 5-ton chassis. There will be two 5-cwt. vans and a Morris Minor Traveller Utility, also a 10-cwt. van.

A Morris-Commercial J-type 10-cwt. forward-control Van is to be shown, and the new B.M.C. 2.2-litre oil engine will he installed in an L.D.2 30-cwt. van and an L.C.5 25-cwt. normalcontrol chassis and cab. This will he the first time that this unit has been displayed in a commercial chassis, although it was shown in an Austin taxicab at last year's Commercial Motor Exhi hit ion.

A Morris-Commercial petrol-engined 3-tonner and two oil-engined 5-tonners, one of the latter being rigid and the other articulated, will be on the stand, which is in the hands of Ets. P. Decrose, S.A. It is hoped to show an ambulance chassis with special bodywork by I. J. Molenaar's Autornobielbedrijf N.V., the Dutch distributors for Nuffield vehicles.

The Minerva stand will contain three Land-Rovers, all of which incorporate themodified engine introduced last year. This engine has equally spaced cylinder bores, redesigned crankshaft bearings and full-flow oil filter which allow higher running speeds for longer periods when being used with the vehicle stationary. The three models to be shown consist of two 86-in-wheelbase chassis, one as a station wagon, and one 107-in.-wheelbase vehicle.

Nine Seddon vehicles are being staged by Ets. Hocke, 30 Rue Gaucheret, Brussels, who are the Seddon agents in Belgium. The centre-piece is to be a 25-cwt. chassis which is Mounted on a revolving platform. A 25-cwt. van with standard bodywork will also be shown.

The new Mk. 12 forward-control n14 7-8-ton chassis, which was seen at Earls Court with a Gardner 5LW power unit, will be exhibited with a Perkins R6 engine, this, together with a Gardner 6LW, being alternative equipment. Another change in the specification of the Mk. 12 F concerns the braking system. A Clayton-Dewandre air-pressure concentric servo is now used to supplement the hydraulic system in place of the piston-operated unit originally fitted.

Other Seddon exhibits will include two Mk. 12 normal control chassis, one with Belgian tipping body and the other with a Belgian cab; two Mk. 6 passenger chassis with R6 engines (one chassis will have a Belgian-built luxury coach body); a Mk. 559/2 P6-powered tractor chassis, also with Belgian bodywork, and a Mk. 7L 3-tonner with a P6 engine instead of the P4 unit normally used.

Another first appearance on the Continent will come from the Standard Motor Co.. Ltd. This is the new 6-cwt. delivery van and it will be shown as a van and as an estate car. The 6-cwt, van is a commercial version of the current 10 h.p. car and is of all-steel, integral-construction with independent front suspension, 33 b.h.p. o.h.v. petrolengine, hydraulic braking and a maximum body capacity of 88 cu. ft. (2.5 _cu. metres). A notable feature of the van is the large window area in the twin rear doors.

The other Standard commercial exhibit is an oil-engined pickup version of the Vanguard.

Thornycroft vehicles will be seen on the stand of I.C.A.M., 76 Avenue General Bernheim, Etterbeek, Casernes, Brussels. Three chassis are to be staged, and in addition a Sturdy Star normalcontrol oiler and a Trusty six-wheeler will be outside the Exhibition for demonstration purposes.

Particular interest will be centred on the engine exhibit on the I.C.A.M. stand. This is a KRN 6/S 200 b.h.p. 11.3-litre blown oil engine, as shown at Earls Court, and will enable foreign buyers to compare this British use of turbo-blowers with Continental methods. The KRN 6/S has a maximum torque output of 625 lb.-ft.